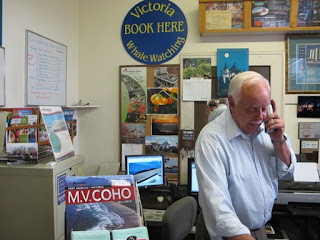 Outdoor lover Bob Stepp calls the nearby Olympics "the finest mountain chain in the world."

I walked into what I thought was the Port Angeles Visitor Center and the friendly fellow told me I was on the wrong side. Wrong side? Turns out I needed to go to the front of the building, where I would get information about Port Angeles and the Olympic Peninsula.

I was in the "Canadian" side of the building, better known as the Port Angeles Victoria Tourist Bureau, a unique travel center that has been operating for 23 years. Heading up the shop all that time is Bob Stepp, a California transplant who came to Port Angeles with the intent of opening up an advertising agency. His office was located inside the nearby Victoria Centre, and people were always wanting to know about Victoria. So he decided to come to their rescue and work in conjunction with Victoria and Vancouver Island, offering services to travelers. The Port Angeles Victoria Tourist Bureau was born, and Bob says the Olympic Peninsula makes it easy for him to say, "There's no place I'd rather live." Of course he's also a big fan of British Columbia, and knows a lot about Victoria and Vancouver Island.

Conveniently located on Railroad Avenue just down from the Black Ball Ferry Line, the PAVTB serves as a reservations agency and tourist bureau for British Columbia. Services include:
The bureau is located at 121 E. Railroad Avenue. It's open seven days a week; hours vary depending on the season.  Call 360.452.7084 or 866.457.5432. 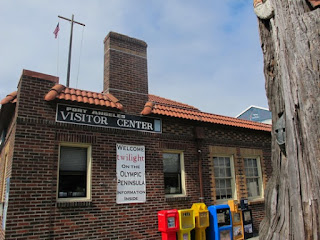 The book and movie Twilight have increased tourism dollars on the Olympic Peninsula.