Tiqa the beluga whale dies from pneumonia at Vancouver Aquarium 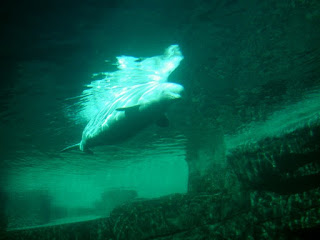 Vancouver Aquarium's three-year old beluga whale, Tiqa, died on Sept. 16, 2011. According to the aquarium, Tiqa's appetite had been "varying" during the week prior to her death -- not uncommon for a beluga whale. Under the direction of Vancouver Aquarium's veterinarian Dr. Martin Haulena, Tiqa was monitored, and blood tests showed no significant abnormalities.

But on Sept. 15, tests revealed that some of the parameters had changed from their normal values. Due to the possibility of infection, she was placed on medication and 24-hour watch to monitor her behavior. At 5 AM on Sept. 16, she required medical intervention -- the animal care team attempted to save her. She died at approximately 5:45 AM.

Dr. Haulena, along with the Ministry of Agriculture's Dr. Stephen Raverty, conducted a full necropsy of Tiqa to determine the cause of death. The preliminary results indicate that she had pneumonia, although the underlying cause is not yet known. Haulena is researching potential metabolic discorders, plus awaiting results of a histopathology. He'll work with specialists across North America and around the globe to review preliminary results as they arrive. The Vancouver Aquarium says an update and preliminary report will be presented early next week.

Beluga whale at the Vancouver Aquarium in 2005. Photo by Sue Frause.