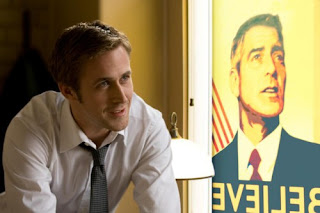 It's on my cultural bucket list, and one of these Septembers I'll make my way to Ontario for the Toronto International Film Festival. Now in its 36th year, the festival runs Sept. 8-18, 2011 and features 123 world premieres. Canada is among 65 countries whose films will be shown on 33 screens throughout the city. There are 21 Canadian feature world premieres (20 co-productions), with 49 Canadian shorts (44 co-productions).

Ryan Gosling and George Clooney in The Ides of March
Photo courtesy TIFF
By Eat Play Sleep at September 05, 2011