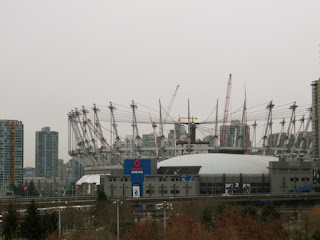 The only two college basketball teams I follow are Boston College and Gonzaga University. That's because my son is a BC grad and my daughter-in-law is a Zag alum. So when I heard that Gonzaga was playing a non-conference game against the University of Hawaii in Vancouver, BC this weekend, I couldn't quite figure out the Canadian connection.

It turns out that not one, but three of the Gonzaga Bulldogs are Canadians: senior center Robert Sacre (North Vancouver, BC); junior forward Kelly Olynyk (Kamloops, BC); and freshman guard Kevin Pangos (Newmarket, Ontario). The game is a homecoming for North Van's Sacre, who attended Handsworth Secondary School, where he led his team to the 61st AAA Provincial Championship as a junior. Here's the 7-ft., 260-lb player's high school bio from the Gonzaga Men's Basketball website:


Attended Handsworth Secondary School in North Vancouver, British Columbia, where he played for coach Randy Storey. Junior season led Handsworth to the title of the 61st AAA Provincial Championships, scoring 17 points, grabbing 12 rebounds and blocking 4 shots to earn MVP honors on way in 82-65 win over Kitsilano. Averaged 25 ppg, 12 rpg and 4 blocks/game. Team finished third in the 2005 Provincial Championships. Was member of Canadian Junior National Team at Global Games in Dallas and in the World Championship Qualifiers in San Antonio, Texas, in summer of 2006. Allso participated in Canada Basketball's 2005 Nike Centre for performance, competing in USA Basketball's International Sports Invitational/USA Youth Development Festival in San Diego, Calif., in 2006 as part of Canada's Cadet National Team. Averaged 10.8 ppg to finish fourth and 6.5 rpg to finish second in the festival .Also a member of British Columbia's U17 team.

Gonzaga's Bulldogs haven't played in Vancouver since November 1966 during the Totem Tournament, when they beat St. Martin's 78-60 and UBC (University of British Columbia) 89-73. This weekend's game, billed as the BC Basketball Classic, is Saturday, Nov. 19 at 6 PM at Rogers Arena. Tickets are $14, with details available via Idol Sports. The last contest between Gonzaga and Hawaii was in the second round of the 1998 NIT, when Hawaii beat the Zags 78-70. Gonzaga leads the all-time series 2-1. And with the difficulty of obtaining tickets for the Zags' home games in Spokane, this will be a chance for the Canadian players family, friends and fans to see the trio in action.

Rogers Arena (formerly GM Place) is home to the Vancouver Canucks of the National Hockey League, and hosted events during the XXI Winter Olympic Games. I attended a NBA game there more than a dozen years ago when the Vancouver Grizzlies were still in town. The last basketball game held at the arena was on Oct. 6, 2010 when the Toronto Raptors defeated the Phoenix Suns in a NBA preseason game. Go Zags!

While I certainly appreciate the admiration you have for us Canadians and particularly, the Canadian players on Gonzaga (the Olynyk family are close friends!), the photo shown is of BC Place undergoing major renovations...not Rogers Arena. BC Place is the football and soccer stadium where our CFL BC Lions and pro-soccer Vancouver White Caps play.
Go Zags!

You know, I wondered about that ... but then I saw the sign in my photo, Rogers Arena, and I thought it was so. I guess not. HA! Looks like the Zags won, so that's good. You know, I've always confused those two venues ... obviously I'm still confused. Thanks for the clarification!