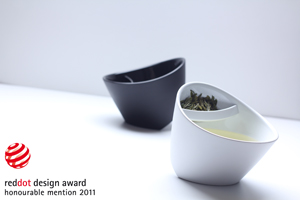 What's being described as a "revolutionary teacup" was co-designed by Daniela Cubelic, a Victoria, BC tea master and owner of Silk Road. The Finnish invented tea cup, called the TipCup, is 11 cm in diameter (4.5"), making it ideal for two-hand holding. It features an inbuilt removal strainer for in-cup tea brewing and easy cleaning, along with a dual-angled, triangle shaped bottom. You simply tip one side to brew and the other side to drink.

Cubelic, a highly acclaimed tea master with more than 20 years in the industry, calls the tea cup's design extraordinary and innovative. With more than 4,000 years of recorded history, she says it's the first tea cup with the dual tipping feature -- comparable to when teapots or teaballs were first invented. Silk Road has the sole Canadian distribution rights of the Magisso TipCup, which is now available at Silk Road's storefront on Government Street in Victoria ($29.90 CAD), in either black or white.

Cubelic compares the tea cup to wine glasses. "It's well known that temperature and the vessel’s lip thickness and shape affects the taste of wine – the same is true for tea,” said Cubelic. The tea master collaborated with inventor Laura Bougdanos and head designer Vesa Jaasko on the cup's design. Although a newcomer on the tea-culture block, the Magisso TipCup  has already won an honourable mention at the reddot design awards for 2011.

Silk Road has been a fixture in Victoria’s historic Chinatown for nearly two decades. The store features a large selection of premium, organic loose-leaf teas; a host of brewing essentials, from teapots to kettles and specialty cups; a tea-tasting bar; and a tea-inspired natural spa. All the store’s organic teas are blended locally in Victoria, with its products available at a number of Canadian spas, retailers and hotels.
By Eat Play Sleep at November 21, 2011