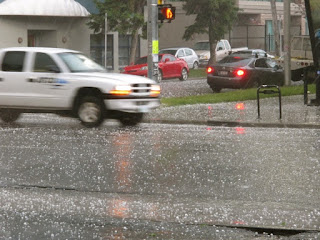 I spent a couple days in Calgary in 2010. Although it was July, the weather was a bit on the chilly side. In  fact, it hailed, as seen in these photos I took while taking cover from the storm downtown. Well, Calgary has a good sense of humor about its weather.

In November 2011, Tourism Calgary and the Calgary Philharmonic Chorus teamed up and created a song compiled from tweets. Between Nov. 21-24, 2011 they reached out to Twitter users asking them, "How do you stay warm in #YYC?" The submitted tweets were complied and turned into a Twitter first (based on internet and social media searches) -- a tweet compilation sung by a philharmonic chorus!

The point of the unique musical-techno exercise was to have both Calgarians and visitors alike share their favorite winter activities that are unique to Calgary. They received such winter warm-up tweet tips as: Raw bar cocktails. Hi-fi clubbing. Wine Bar down in Kensington. Try hot yoga! Calgary Flames shirts.

Twenty of the tweets were incorporated in a song arranged by Calgary Philharmonic Chorus Master Timothy Shantz. The song was set to the classic piece O Fortuna from Carmina Burana, and recorded at the Jack Singer Concert Hall. It was used to promote the final weekend of the Calgary Philharmonic Orchestra's Virtuosity Festival. The video can be viewed at Tourism Calgary's website, www.visitcalgary.com. 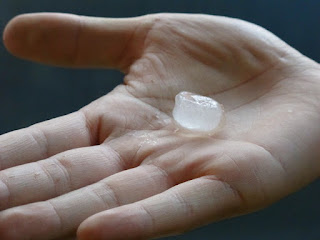