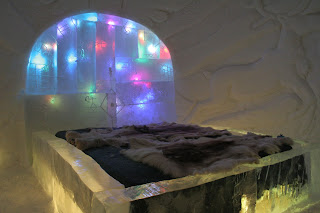 Quebec has the claim of being home to North America's first ice hotel, now located about ten minutes outside Quebec City. My husband and I spent a very cold (but fun!) night there in 2004, and now there's another chilly hotel calling to me in Quebec. Although I'm not sure if I'm going to put it on my bucket list -- but maybe my ice bucket list.

Snow Village Canada is opening on Jan. 6, 2012 in Montreal's Parc Jean-Drapeau. Already established in Europe for the past ten years, it will be Snow Village's first foray onto western soil. Snow Village Canada will include a 30-room ice hotel with 15 standard rooms, 10 theme suites and five igloos. Igloos! The complex also features heated outdoor spas, a 60-seat restaurant, 250-seat bar with terrace, chapel maze, slides and a conference center that accommodates groups of up to 200.

The three promoters of Snow Village Canada (Carl Fugere, Yanick Tremblay, Guy Belanger) first experienced the Snow Village concept in Finland (there is another one in Norway). As fans of everything Nordic, they were enamored with the Finnish village and decided to import it to Montreal. "The Montreal version of Snow Village will be much more elaborate and have more features than the Finnish version," said Fuger." Each year, the village will depict a different city through its sculptures, design and activities. No surprise that for its debut year, Montreal will be showcased. The Snow Village will create around 100 jobs in Montreal. 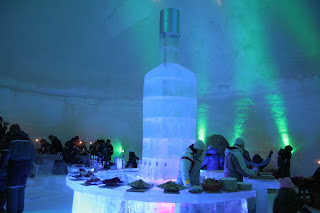 Have a wonderful Holiday Season and thank you for the great blog throughout the year !

Thank you! Looking forward to crossing the border in the new year ... O Canada! Happy Holidays to you ...