Art Gallery of Greater Victoria presents a five-artist 'Throw Down' 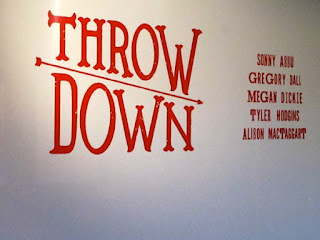 Another reason to stay at Fairholme Manor in the lush Rockland area of Victoria, BC is its proximity to the Art Gallery of Greater Victoria. After delicious Sunday morning breakfast from innkeeper Sylvia Main (who is working on her second cookbook, Easy Elegance from Fabulous Fairholme), I made the ten-minute walk in the rain to the gallery on nearby Moss Street.


A cool, new exhibition opened at AGGV on January 17 and runs through May 6, 2012. Throw Down features five British Columbia artists: Sonny Assu, Gregory Ball, Megan Dickie, Tyler Hodgins and Alison MacTaggart. So what is a throw down? Nicole Standbridge, AGGV Associate Curator of Contemporary Art, explains it this way: "To throw down can mean many things: to celebrate in a big way, to fight for something meaningful, or to contribute resources to make something happen."


In Throw Down, the five artists contributed work that speaks specifically to issues and ideas that are relevant to each of them. Through sculpture, video, photography and public intervention they address socio-political issues and economic struggles -- invoking a call to action or an invitation to play. "Through humour, satire and critique, the act of throwing down extends into issues of identity, value, preservation, social justice and consumption," said Stanbridge. 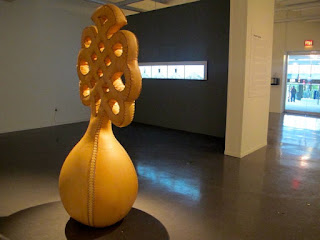 The impetus for the exhibition is Megan Dickie's sculptural work Submission, and the video Step into the Ring. Her adult-scale-bop-bag (above), pops back up to meet you after punching it. I missed the fact that it's in the shape of the Canada Council for the Arts logo. According to AGGV, it "speaks dynamically to the shared challenges face dby artists, institutions and funding agencies to keep art thriving." 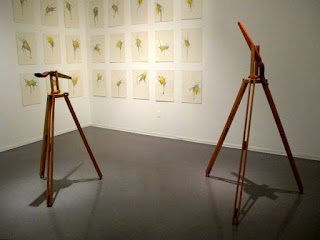 Alison MacTaggart's The Egg Throwing Apparatus (above) appears to be a functional gadget for the act of egg throwing. The artist uses unique design and humor to shed light on the metaphorical egg throwing that could occur as a result of intolerance and discrimination "when individuals identify themselves to their community as queer." 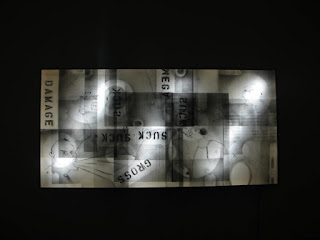 You Suck is a video installation and series of drawings by Gregory Ball that addresses natural landscape, industrial practices and consumer culture. The installation component, an oil drum etched and beaten with images from the video, was inspired by a recent act of solidarity by Ball and his colleagues during the 2011strike at Vancouver Island University. People convened around a wood-burning oil drum that kept the striking employees warm, and the unusual meeting place resulted in discussion and sharing of stories. 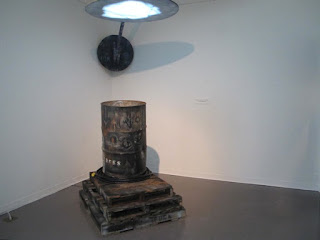 Artist Sonny Assu's contribution is a new series of found objects. Assu took cuts of cedar from a log home development on the We Wai Kai Nation reserve where his family lives in Campbell River. The discarded objects have been transformed into masks, and also used as interventions in a photo series titled Artifacts of Authenticity. The series is a collaboration with artist Eric Deis, and the objects were placed in the context of a museum (artifact), commercial gallery (fine art) and gift shop (souvenir).

Victoria artist Tyler Hodgins' Sleeping Bag is a series of temporal sculptural interventions that will be placed throughout the city of Victoria during the run of Throw Down. The sculptures are cast forms of figures in a sleeping bag, made from colored ice. The forms will melt over time, leaving a trace of color from the ice that will eventually wash away with exposure to the elements. The installations address the lack of visibility of the homeless and the issue of homelessness in Victoria. Check aggv.ca for updates on dates and locations of Sleeping Bag. Upcoming events include:

Friday, March 9, 8-11 PM Urbanite: A boisterous night at AGGV of celebrating the creativity by the artists in Throw Down. Cocktails, live performances, spontaneous art production and interactive exhibition tours.

Sunday, March 18, 2-4 PM Family Sunday: A drop-in afternoon of hands-on art-making inspired by the materials and techniques used by the artists in Throw Down.