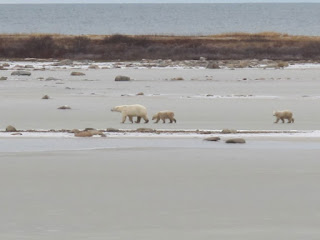 The opening of the International Polar Bear Conservation Centre (IPBCC) at Winnipeg's Assiniboine Park Zoo is a welcome addition to the conservation of polar bears. And now Manitoba can lay claim to taking a leadership role. The new centre is also a key component of the Journey to Churchill exhibit that's currently under construction at the zoo -- all part of the Assinboine Park Convervancy's $200 million redevelopment plan for Assiniboine Park. The IPBCC was funded by the Province of Manitoba and City of Winnipeg, and is the hub of the zoo's research and conservation efforts. There are no bears in the centre yet; read about this week's opening in the Winnipeg Sun.

Manitoba is home to a large population of polar bears that can be observed from the town of Churchill. I visited the Polar Bear Capital of the World in November 2011, and it's one of my most memorable trips in years. I went on a Tundra Buggy adventure with Frontiers North Adventures, and my only regret was that my hubby wasn't along for the adventure.

Each season, polar bear cubs in the north are orphaned, due to a variety of environmental factors. If an orphaned cub (which would die without its mother) is found within the control zones of a northern Manitoba community, it may be a candidate for rescue and transported to the IPBCC in Winnipeg. The facility was designed to care for, rehabilitate and transition orphaned polar bear cubs rescued by Manitoba Conservation & Water Stewardship. The center also supports and facilitates research efforts that contribute to environmental and wildlife education, along with the conservation of polar bears.

The building is composed of four distinct areas for bears, keepers, researchers and visitors -- the bears and keepers are in the upper level and back areas. The outside bear enclosures have been expanded and provide more space both inside and out. The researchers' area includes a specialized lab and an expanded laboratory space.

The IPBCC's Visitor Centre has a multimedia-rich interpretive gallery that features interviews, interactive games and objects and interpretive signage about bears, researchers and climate change. The focus of the centre is educating the public about polar bears, increasing awareness of the fragile Arctic ecosystem and motivating people to reduce their carbon footprint and help save the polar bears.

Mother and her polar bear cubs in Churchill, Manitoba
Photo by Sue Frause
By Eat Play Sleep at January 26, 2012