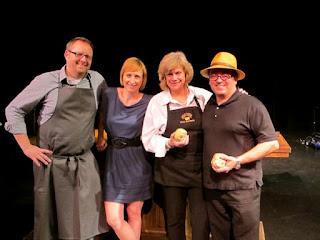 How cool for the six Seattle chefs who were invited to Quebec for the annual Montreal en Lumiere or Montreal High Lights festival. The 13th annual winter celebration, Feb. 16-26, has expanded to include even more cold weather fun and frivolity. Among the many culinary events was Spotlight on Seattle, described this way in the program:


The birthplace of grunge, Seattle, a city whose inhabitants are known to be true coffee lovers, is the perfect fusion of urban life and nature, which is why it calls itself 'metronatural.' This is even reflected in the city's cuisine, which thrives on seasonal, local, and oftentimes organic products.

The Seattle chefs were Matthew Dillon, Jason Franey, Thierry Rautureau, Ethan Stowell, Jason Stratton and Jason Williams. I'm a big fan of Rautureau and Stowell, and hosted them on a recent Kitsch 'N Bitch live cooking and conversation show at Whidbey Island Center for the Arts. Great guys! And it was all the more fun to read an interview in the Montreal Gazette with Chef Ethan Stowell. Seattle cooks on!