Top Chef wraps up its season finale with two shows in Vancouver, BC 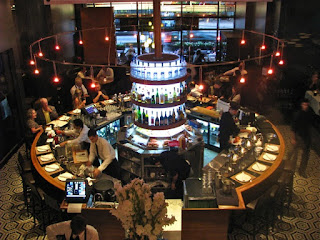 With Top Chef being in Whistler for its third to last episode last week (and what an odd episode that was!), it's no surprise the cast and crew traveled back down the Sea to Sky Highway to film the last two episodes of the season in nearby Vancouver, BC. Even though it's Top Chef: Texas, this season nine show decided to head north of the 49th Parallel for its final three shows. The top prize? Being named Top Chef plus receiving $125,000 in prize money.

Both of the final two episodes were filmed in January around Vancouver (under unusually sunny, blue skies) at The Fairmont Hotel Vancouver. The episodes highlight local ingredients, some of Vancouver's notable residents chefs, no shortage of "beauty" shots and lots of kitchen drama.

As part of the three-part finale in British Columbia, Rocky Mountaineer's historic Vancouver Station and train will be on tonight's show as the location of the final judges' table segments; next week's season finale winner will also be revealed at the table. Several of Rocky Mountaineer's custom designed rail coaches, which travel between Vancouver and the Canadian Rockies, were lit up in the background during the filming. The train's Lounge Car was used as the "stew" room for the chefs as they waited ("stewed") for the judges' deliberation. Rocky Mountaineer was also featured in a 2009 episode of The Bachelorette.

Two restaurants in the GLOWBAL COLLECTION were also used as locations in Vancouver. Both Black+Blue and COAST's kitchens were venues for the two Top Chef finalists, where they presented multi-course menus to both guests and the judges. In addition to Top Chef's all-star panel of judges, Canadian chef/restaurateur and Top Chef Canada Mark McEwan was a judge.

Gail Simmons, one of the show's regular judges and a Toronto native, had this to say about being in Vancouver: "I loved shooting our Top Chef finale in Vancouver for so many reasons," said Simmons. "Of course I'm Canadian, so perhaps a bit biased, but I really feel it's a city that possesses every quality a great metropolis should: diverse cultural history, delicious modern and eclectic food made with the very best ingredients, ocean and mountain views at every turn, and the friendliest people I have ever met," she said. "I can't wait to return."

COAST restaurant in Vancouver, BC
Photo by Sue Frause