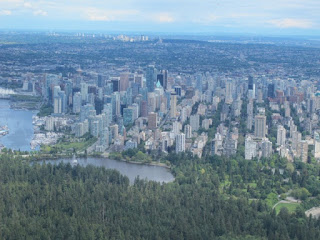 I stumbled upon Tourism Vancouver's new destination film, It's You ... Vancouver, on Fairmont Waterfront Hotel's Facebook page.  Tourism Van says it used "multiple platforms" to send its message, and is billing it as "unlike any promotional piece of its kind."

The three-minute video uses a local Vancouver duo who fuse their urban beats with traditional folk sounds. Adam Bailie and Reid Hendry of Watasun were once buskers on Vancouver's Granville Street, and now are recording, producing and selling their own albums while "taking inspiration from the city's diversity, vibrancy and unity."

You'll see them performing in the video around iconic Vancouver attractions, including the Vancouver Convention Centre, an Aquabus ferry and Grouse Mountain. With the incorporation of a local band and the original song, It's You ... Vancouver is being billed as the first professionally produced destination film in music video format.

Nice photos and catchy tune -- it definitely envelops Vancouver with a world beat and sound. But I'm giving it a B due to lack of precipitation and bumbershoots. We all know it rains in Vancouver, so why not revel in it? It leaned a bit too much toward the Margaritaville side of life ... grey can be cool, too.

Vancouver from aboard Helijet in June 2011
Photo by Sue Frause

I agree. Rain plays such a vital role, not only in creating this lush enviroment we live in, but also in how we dress and live our lives. A few shots of colourful umbrellas on glistening pavement showing life doesn't stop in this part of the world because of a little rain would of been more realistic. Reminds me of of a story. 15 years or so ago I lived in the Westend of Vancouver and was just finishing a run in Stanley Park and was walking abit to warm down when I heard a man, I assumed a tourist from drier climes, exclaim to his walking companion that you'd have to be nuts to run in the rain. I stopped, smiled and explained that if you don't run in the rain in Vancouver then you don't get to run much at all. He seemed perplexed.

Thanks for your thoughtful comment. I would have appreciate a bit more reality than the glossy, Technicolor version of Vancouver that we all were exposed to during the 2010 Winter Olympics. I realize wanting to show your best side(s), but I'm ready for a destination to get honest about what they're all about. I don't usually pack my flip flops when I take Amtrak Cascades to Vancouver ... but I always have my rain gear at the ready.