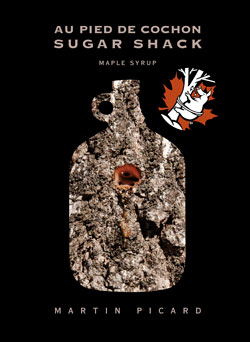 I've yet to dine at Martin Picard's Au Pied de Cochon in Montreal, but the nose-to-tail cuisine resto is definitely on my Quebecois bucket list. After all, it's one of Anthony Bourdain's favorite restaurants in the world. You can see a video clip here from his No Reservations show in 2008 (but if you're squeamish about foie gras, don't click on). More recently, Bourdain highlighted Montreal in his new travel and food series, The Layover.

Now Chef Picard has written a book titled Sugar Shack. Described as "the encounter between a renown chef and a rare and natural sugar," Sugar Shack is a cross between an art book and a culinary encyclopedia. Its 380 pages include 100 recipes by Picard, while describing a full year in his restaurant. The book journeys through the seasons, paying tribute to gastronomical and sugar making traditions, something Picard wants to preserve and pass on. Maple syrup, a rare commodity, is highlighted with its wide range of qualities and uses.

The book includes 2,000 photos, a short story by Marc Seguin, a journal about life at the shack during the sugaring off season, a technical chapter on harvesting maple water and the production and consumption of maple syrup. There are also illustrations by Tom Tassel.

Chef Picard is visiting Vancouver's Barbara-Jo's Books to Cooks on Thursday, March 29, 2012 to fete his new book. There will be a sugaring off party from 4-6 PM featuring Picard and Sugar Shack, along with snacks and beverages. Tickets for the reception are $85 and include a signed copy of Sugar Shack.

I visited a sugar shack in Quebec one winter; read more about it in a previous post.

This is an interesting new show about culinary and food. I will check out the pilot episode.