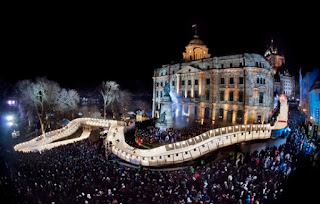 If you haven't heard of Red Bull Crashed Ice, you may think it's some sort of exotic winter cocktail. It is, sort of -- and a physical one to boot. For the seventh year in a row, the Red Bull Crashed Ice World Championship was held, featuring 80 competitors from around the world soaring down an icy course. This year's cold competition was held in Quebec City, with the season finale on March 17, 2012.

The downhill mavericks battle their way to the bottom of a 540-metre urban ice track that contains massive drops, hairpin turns, big-air jumps, drop-offs and gaps. Speeds reach more than 60 km/hour. According to Red Bull Crashed Ice organizers, Saturday's Saint Patrick's Day race was the most dramatic world championship in history, with Arttu Pihlainen from Finland looking to be headed to the title.

But in the end, Canada's Kyle Croxall won the Ice Cross Downhill World Championship in front of 100,000 spectators by taking second place behind Pihlainen. Kyle was helped to the title when his brother Scott crashed into a wall late in the race. Here is Red Bull Crashed Ice organizers' explanation:

"Championship leader Kyle Croxall needed to finish at least second to win the title, but the Canadian firefighter was well behind his brother Scott in third place with time running out as the Finn streaked away from the pack. But Scott Croxall suddenly crashed into a wall after a tricky jump and fell to the ice, allowing Kyle Croxall to leapfrog him into second and give Canada its first world championship in the sport’s history. Kyle Croxall, runner-up in 2010 and 2011, finished the year with 3000 points, just 40 ahead of Pihlainen (2960) with Scott Croxall third (2300)."

Pihlainen was the 2011 world champion, his sixth career victory. But Kyle Croxall ended up driving home the coveted MINI, which is awarded to the champion. Croxall won the first two races of 2012 held in St. Paul, Minnesota and the Netherlands before stumbling at a race in Sweden, where he ended up in 13th place. Canadian Ross Thompson was bestowed with the MINI Rookie award as best newcomer. Go to the Red Bull website to see video highlights of the race. 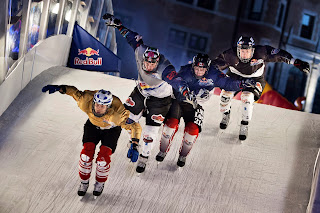 Top: The Red Bull Crashed Ice course in Quebec City, located below the Louis S. St- Laurent Building and in the shadow of The Fairmont Chateau Frontenac. Bottom: Racers in action during the 2012 championship. Photos: Sebastian Marko and Joerg Mitter.
By Eat Play Sleep at March 18, 2012