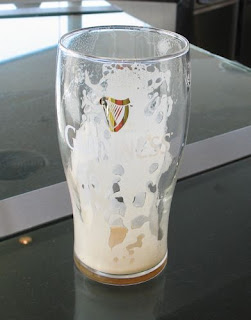 I had no idea that St. Patrick's Day was a provincial holiday in Newfoundland and Labrador. It's celebrated on the closest Monday to March 17, so this year it's March 19, 2012. It means that government offices are closed, but Canada Post is open, as are most businesses, stores and many schools. Not sure why it's such a big deal in that part of Canada, but good for them! Here are some other St. Patrick's Day newsmakers and events in Canada. Erin Go Bragh!

Ottawa Citizen ~ How we celebrate St. Patrick's Day in Canada

The Wall Street Journal ~ Little Pub on the Prairie: A Saskatchewan Tavern Tries to Pull Ahead on St. Patrick's Day


My one and only Guinness, consumed at the Guinness Storehouse in Dublin, Ireland. Photo by Sue Frause.
By Eat Play Sleep at March 17, 2012