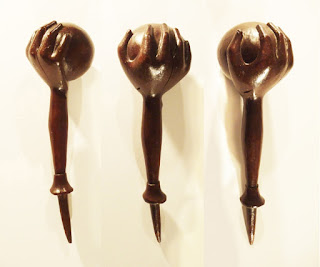 The University of British Columbia's Museum of Anthropology (MOA) in Vancouver has acquired an object of global historical and cultural significance. The rare ceremonial club, received by explorer Captain James Cook from a Canadian First Nation during his final voyage (1776-1779), is being donated to the museum by a leading arts philanthropist.

The club was recently purchased through a private dealer in New York, and valued at $1.2 million. It is the last remaining object from Captain Cook's personal collection that was not housed in a public museum. Thanks to the Audain Foundation for the Visual Arts, the club returns to British Columbia, where the explorer received it from the Nuu-chah-nulth people on the west coast of Vancouver Island in 1778.


According to the Audain Foundation, the ceremonial club has immense historical and cultural value, and is the first and only in Canada. Other Nuu-chah-nulth objects collected by Cook are housed in museums in London, Berlin and Vienna. Michael Audain, chair of the Audain Foundation for the Visual Arts and an active Canadian arts supporter, is delighted. "I hope to encourage the repatriation of other Northwest Coast art works to public museums and cultural centres in British Columbia," said Audain.

MOA says the club was misattributed in a number of historical documents as a "curious war instrument" from the "Sandwich Isles" (Hawaii). In fact, it was carved by an Aboriginal Northwest Coast artist as early as the mid-1700s, and is considered to be the oldest and most finely executed club of this style. Carved from yew wood in the shape of a hand holding a sphere, MOA says it may have been both a ceremonial symbol of its owner's high rank and a function tool or weapon. The club eventually found its way from Cook's family into the Leverian Museum in London, where it was sold in 1806. It passed through several private collections in Britain and the U.S. and was eventually obtained by the Audain Foundation and returned to British Columbia.

The club is displayed at the east entrance to the Multiversity Galleries of MOA, which house more than 10,000 objects from around the world.

Three views of the ceremonial club
Photo by Bill McLennan
By Eat Play Sleep at March 23, 2012