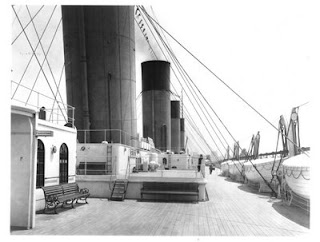 When I went on my Great Big Canadian Train Adventure in 2009, I traveled aboard VIA Rail from Halifax to Vancouver. And although I visited Pier 21, the Canadian Museum of Immigration, I missed the Maritime Museum of the Atlantic. Located on the Halifax waterfront, the museum is commemorating the 100th anniversary of the sinking of the RMS Titanic, which is being acknowledged around the world on April 15, 2012.

On the Titanic's maiden voyage from Southampton, England she hit an iceberg in the North Atlantic on the night of April 14, 1912. Less than three hours later, the ship was lying at the bottom of the ocean. A total of 1,518 people lost their lives out of the 2,228 passengers and crew on board. Shortly after the Titanic sank, White Star Line ordered cable ships based in Halifax to begin recovery of the bodies of the victims. Of the 209 bodies brought back to Halifax, 150 were put to rest at the city's three local cemeteries:
The Martime of the Pacific's permanent exhibit, Titanic: The Unsinkable Ship and Halifax, includes the largest collection of wooden Titanic artifacts in the world. From April 12-Oct. 31, visitors will also be able to discover the role that Halifax cable ships and their crews played in the Titanic recovery effort via the cable ship exhibit at the museum. Diaries of crew members and mementos from their experiences will be on display. Other exhibits, programs and special events at the museum include:

Elsewhere in and around Halifax are events at the Bedford Institute of Oceanography in Dartmouth. Visitors will be able to view an exhibit that portrays what the Titanic looks like today as it lies on the ocean floor. A Titanic 100 Year Experience Tour will be offered twice daily by Ambassatours from June 1-October 15. Tickets for the 75-minute bus tour are $28.