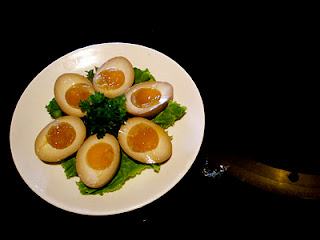 What a great gig for somebody who (a) loves Asian cuisine and (b) loves to write and (c) is skilled at doing both. And there's a lot of BIG interest out there. When BC's Tourism Richmond announced its Richmond Foodie Blogger competition, they received more than 1,500 entries. The one-year contract includes a salary of $50,000; apartment and living compensation; daily stipend for all restaurant meals; and a one-year membership to the Richmond Olympic Oval (a 23,000 sq. ft. fitness center) to work off all those calores. The unique position was open to anyone in the world eligible to work in Canada for a year. In exchange, the Richmond Foodie Blogger will visit at least one of Richmond's 800+ restaurants each day, resulting in daily blog posts, social media updates and acting as an ambassador during Richmond's 365 Days of Dining Campaign.

On April 23, the names of the 12 semi-finalists were announced, selected for their quality of writing and photography; online community engagement and of creativity; and overall aspect of their blogs. The dozen contenders include candidates from London, New York and Toronto and were interviewed either in-person or via Skype. The group of 12 will be narrowed down to three finalists, who will undergo a second interview before the Richmond Foodie Blogger is announced by the end of May.

British Columbia is no stranger to unique marketing campaigns. When Vancouver International Airport turned 80 last year, they held a contest for somebody to live at YVR for 80 days. Jaeger Mah, a Port Alberni native now living in Vancouver, was selected for the gig. I met the affable young man at the end of his reign in October 2011 while I was enroute to Churchill, Manitoba. Read more about my visit with Jaeger here.

Food! Are you familiar with "edible" magazine. They are a free foodie magazine seen all over North America

The current edition ( click on digital edition ) for Vancouver

has a wonderful recipe for Tea Eggs. They look amazing.