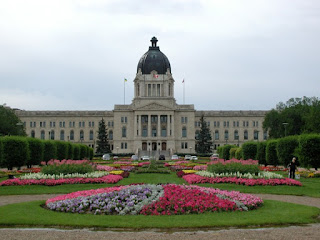 They won't be receiving the adulation of the hundreds of thousands that showed up to welcome newlyweds William and Kate in 2011, but it's still a big deal when the Royals touch down on Canadian soil.

Prince Charles and Camilla's Royal Tour 2012 started on Sunday, May 20 when they landed in Fredricton, New Brunswick. I've only passed through New Brunswick during my Great Big Canadian Train Adventure in 2009, and I think was sleeping. But the province is on my Canadian bucket list, and my hubby and I are planning a visit there en route to a meeting in New York City in 2013. It will be springtime, and it should be lovely.

The Government of Canada has put a link on its website with full details of the tour at Itinerary - Royal Tour 2012. Their four-day visit includes:
Saskatchewan Legislative Assembly Building in Regina | Summer of 2004
Photo by Sue Frause
By Eat Play Sleep at May 21, 2012