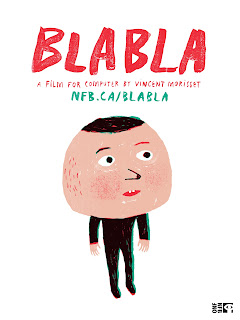 The National Film Board of Canada picked up two awards at the 16th Annual Webby Awards. The awards are the internet's highest honor and the ceremony was held May 21, 2012 at The Hammerstein in Manhattan Center, New York.

Vincent Morisset's BLABLA, a "film for computer" produced by Hugues Sweeney for the NFB, received a Webby Award for Netart in the Websites category. Spend time with this one, it's interactive, and very clever (the character is reminiscent of Harold and the Purple Crayon). Here's a partial description from the film's website:


Vincent Morisset's BLABLA is an interactive tale that explores the fundamental principles of human communication. The viewer makes the story possible: without him or her, the characters remain inert, waiting for the next interaction. The spectator clicks, plays and searches through the simple, uncluttered scenes, truly driving the experience. Each of the six chapters in the story depicts a different aspect of communication: learning a language, making small talk, expressing emotions, etc. Rich in opportunities for discovery, BLA BLA illustrates these concepts through endearing yet perplexing characters. The figures were designed by Caroline Robert using a variety of techniques, both traditional and hi-tech.

God's Lake Narrows won a Webby for Best Use of Photography in the Websites category. It was created and written by Kevin Lee Burton and Alicia Smith, and produced by Alicia Smith and the NFB Digital Studio. Burton was born in the community, and God's Lake Narrows uses photos by Scott Benesiinaabandan, a Manitoba-based Anishinabe artist. Sound design was by Christine Fellows. The interactive documentary is about God's Lake Narrows, Manitoba ... a reserve located in the northeastern woods of Manitoba. It's quite moving ... I watched it twice.
By Eat Play Sleep at May 30, 2012