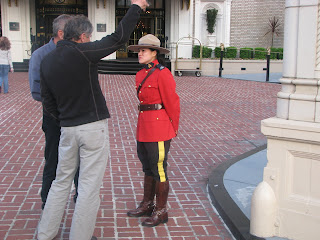 The tourism folks at Whitehorse in the Yukon territory have to to be smiling this last week of May. More than 300 delegates have arrived in the city of 26,500 for GoMedia Canada Marketplace 2012, May 27-31. It's the first time that the travel marketplace has taken place North of 60. The Yukon government, working in conjunction with the Canadian Tourism Commission (CTC), was successful in its bid to host this year's event. And it's a region of Canada that's on my travel bucket list.

The delegates include 150 media from across Canada and around the world, along with 150 representatives from the tourism industry. The objective is for the travel media to be inspired by all things Canadian, and visit and write about Canada's culture, landscapes and people.

The event is similar to Canada Media Marketplace, geared for US journalists, an event which I've attended on several occasions in California over the years. The format is more or less "speed dating," where travel journalists have set appointments and meet face to face with tourism industry people over the course of a few days. Typically, the vendors include resorts, hotels, PR firms, city and provincial tourism boards and such expedition and transportation companies as Frontiers North Adventures and Rocky Mountaineer.

The anticipated end result for the Yukon territory is media coverage to its key target markets that include Canada, USA, Germany, UK, Australia, France and Japan. Since it started in 2004, GoMedia Canada Marketplace has generated more than $20 million in (unpaid) advertising return for Canada's tourism industry via journalists' words and images in print, online, television, radio and via social networking.

Whitehorse venues for the events include the Kwanlin Dun First Nations Cultural Centre and the MacBride Museum of Yukon History, while five hotels will house the delegates. This year's ninth edition of GoMedia includes professional development sessions with both media and industry representatives, along with a number of networking opportunities and hosted lunches and dinners.

The journalists will also be able to take day tours around the region, including panning for gold, hiking in the hills and sampling such northern style cuisine as Arctic char and caribou. Pre- and post-tours hosted by the participating Canadian tourism partners are offered, too. This year's major sponsors of GoMedia include Tourism BC, Parks Canada, City of Whitehorse Tourism, Air North, Travel Alberta, Driving Force, Ontario Tourism, Tourism Richmond BC, Unity Clothing, Waterway Houseboats and Tourism New Brunswick.

A member of the RCMP listens to a delegate at Canada Media Marketplace in San Francisco in 2010. Photo by Sue Frause.