What a cute Canadian Google Doodle! If you're in the US, you won't see it, but Canadians logging into Google will find a fun tribute to Canada Day (Fete du Canada) on Google's home page. The national day of Canada is July 1 and honors the July 1, 1867 enactment of the British North America Act that's now called the Constitution Act, 1867 in Canada. The act united three colonies into a single country called Canada. Originally known as Dominion Day (Le Jour de la Confederation), the name was changed to Canada Day in 1982, when the Canada Act was passed.

So what about the Google Doodle? The 'doodler' behind the image is Willie Real. He's based at Google headquarters in Mountain View, California and found inspiration in various Canadian icons while researching the image. They included Canada's first stamp that features a beaver with a crown above his head. Stylistically, Real was influenced by the Dorset Prints of Baffin Island. Yet another place on my Canadian bucket list!

This year there won't be any Royal visitors to Canada on Canada Day. In 2011, William and Kate were in Ottawa on the holiday during their North American tour. The year before, the Queen's nine-day Royal Tour of Canada also included a stop in Ottawa on Canada Day.

Last year on this date, I posted a blog with the country's national anthem O Canada being sung in both English and French. Happy 145th, Canada! Here's to our friends north of the 49th Parallel. 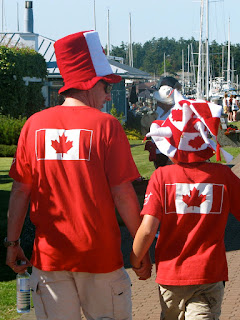 Google Doodle by Willie Real
Canada Day couple in Sidney, BC on Vancouver Island in 2009 | Photo by Sue Frause
By Eat Play Sleep at July 01, 2012

Thank You. Happy Canada Day to you as well. It's a cool one in Vancouver while friends and family in Ontario and Quebec are frying :(