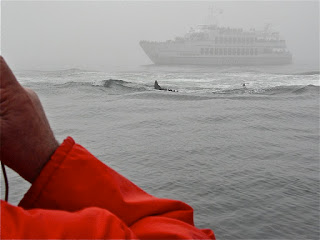 One of the biggest surprises for me when I made my first summertime visit to Quebec in 2004 was discovering there were whales in the St. Lawrence River. Really? As often as I had romanticized the St. Lawrence as a child (I often dreamt of someday seeing the river whil coloring it blue on a map), I never imagined it was home to whales. As a west coaster, I'm familiar with whales, as orcas and humpbacks inhabit our waters. My hometown of Langley on Whidbey Island has a Welcome the Whales Festival each spring when the grey whales come to town.

It turns out that the province of Quebec is also home to a number of whales including humpbacks, belugas and minkes. There are also blue whales, the largest known mammal, and fin whales. Whale watching season runs May through October, and the Hotel Tadoussac makes for a good base for the summer activity and other ecotourism outings. If the hotel looks familiar, that's because a number of the outdoor shots for the 1984 film Hotel New Hampshire were shot there. The movie, based on the 1981 John Irving novel of the same name, starred Jodie Foster, Rob Lowe and Beau Bridges. 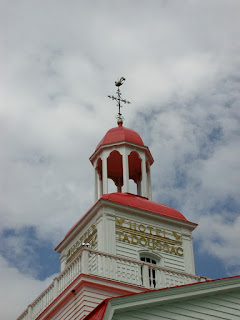 Hotel Tadoussac opened in 1864 in Tadoussac, Canada's oldest village, which celebrated its 400th anniversary in 2000. It's located 188 km (117 miles) east of Quebec City on the northwest shore of the Saint Lawrence Estuary where it meets the Saguenay River. The combination of the cold, fresh water of the Saguenay and the warmer, salty water of the St. Lawrence makes for a rich marine environment. There is an abundance of krill in the rivers and in summer, the Saguenay Fjord attracts 13 species of whales that use it as their feeding grounds. Hotel Tadoussac is offering a Whale of a Time package through Oct. 8, 2012. Starting at $150CAD, the package includes one night's accommodation, one buffet breakfast and one three-hour whale-watching cruise. 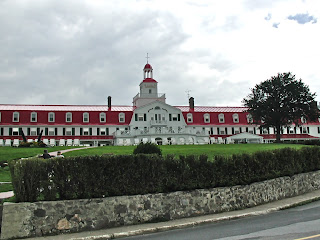 Tadoussac is located in the region of Cote-Nord, which is also home to the Whale Route (Route des baleines), running 900 km (560 miles) along the coast from Tadoussac to Blanc-Sablon. Considered one of the five best whale-watching destinations in the world, it's only fitting that the Marine Mammal Interpretation Centre (CIMM) is in Tadoussac, and is one of ten maritime museums in Quebec. Located near the Tadoussac wharf, it's a good idea to stop by the museum before going out on a whale watching tour. In addition to its large collection of whale skeletons, the museum features interactive exhibits, a garden of indigenous plants and a new workshop on whale songs. You can also see the documentary Meeting With Whales of the St. Lawrence, co-produced with biologist Jean Lemire.