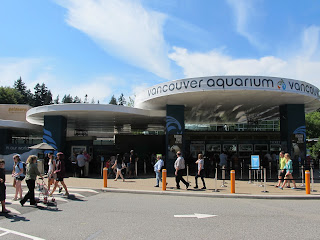 Entrance to the Vancouver Aquarium in Stanley Park. Photo by Sue Frause.

I was saddened to read that the Vancouver Aquarium's beluga whale, Kavna, died on August 6, 2012. As the aquarium's oldest (reported to be at least 46 years old), it was also known to be the oldest beluga whale in any accredited aquarium in North America.

Vancouver Aquarium General Manager Clint Wright said the staff and volunteers were saddened by the loss of Kavna, but were left "with very warm memories of her at the Vancouver Aquarium." A necropsy of the whale was conducted by Dr. Stephen Raverty of the Ministry of Agriculture, and preliminary results indicate that Kavna had lesions "most consistent with cancer," although and infectious cause was also considered a small possibility. Raverty and his assistants said there were widespread lesions affecting the reproductive tract, along with many other tissues. "The treatment and care she had been receiving were focused on treating a reproductive disorder," said Raverty. "We had hoped that her illness was treatable, but early findings are consistent with an incurable cancer." More tests will be conducted during the next few months.

According to the Vancouver Aquarium, beluga whales are believed to live 25-30 years in the wild. Kavna was considered to be at the end of her natural life. The aquarium said she had lived a "long and healthy life" in the care of their marine mammal team. 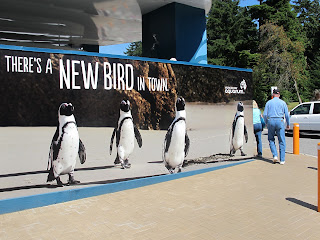 I visited the aquarium last week while spending a few days in Vancouver, but it was so crowded with visitors (and unusually warm outside), that I took a quick look at the new Penguin Point exhibit and headed out for the shade of Stanley Park. Located between the Wild Coast and Canada's Arctic exhibits, Penguin Point opened May 18, 2012 and is home to seven African penguins that will be housed at the aquarium for two years. The exhibit was inspired by Boulders Beach near Cape Town, South Africa, which is their natural habitat. Their new BC environment features a stony beach, 12,000-gallon water tank and a cliffside. The African penguins' numbers have plummeted from 100,000 in the early 1900s to approximately 20,000 today. The decline is due to overfishing and climate change. Through the Species Survial Plan program of the Association of Zoos and Aquariums (AZA), the Vancouver Aquarium is one of many trying to save penguins while giving visitors an opportunity to learn more about them. There's also a live penguin cam at the Vancouver Aquarium, accessible 24 hours a day. The septet of penguins was named after BC places: Lillooet, Tofino, Hope, Steveston, Nelson, Sechelt and Salt Spring.

I admit I wasn't all that wowed by the exhibit at the Vancouver Aquarium, maybe because I had been to Boulders Beach in Simon's Town, South Africa while visiting Africa with my family. Simon's Town is about 40km southeast of Cape Town, and Boulders Beach is the only place in the world where visitors can get up-close to the African penguins. The South African National Parks manages the site, which includes boardwalks for viewing and an information center. Of the 17 penguin species in the world, these African penguins are the only ones that breed in Africa, and have been on the endangered list since May 2010. 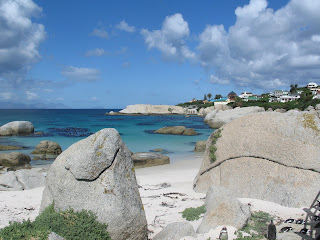 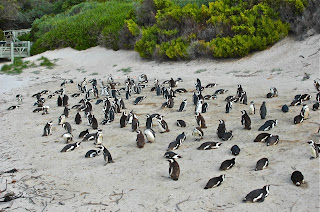 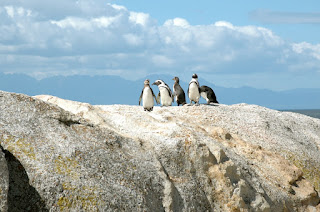 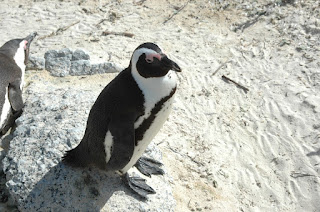 Boulders Beach looks fantastic. Not surprised that any attempts by an aquarium would pale in comparison.

Yes, really made it hard to get excited about seeing these transplanted African penguins in such a small space. I sort of feel bad for them (apparently they're on loan from a zoo/aquarium in New England). And they don't look as good as the ones in SA, but maybe it's molting season or something. Sort of like they need a spa day!