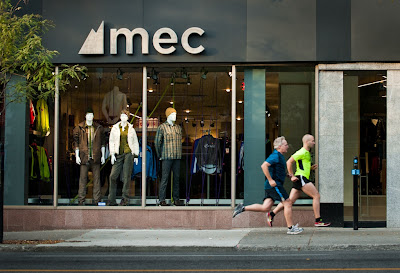 It may not be as big news as Nordstrom opening in Canada, but Canadian retailer Mountain Equipment Co-op (MEC) opened its first urban boutique of ready-to-wear activewear on September 22, 2012 in Montreal. It's the company's fourth store in Quebec, located in the heart of the Plateau-Mont-Royal at 4934 rue Saint-Denis, and simply called MEC.

This new boutique concept, in addition to the other MEC stores in Canada, is part of MEC's new focus and expansion of its product line. According to Patrick Tremblay, MEC's regional director for eastern Canada, research shows that 7 out of 10 MEC members pursue sporting activities close to home, along with the backcountry. "Since they wish to stay active in the city," said Tremblay, "members have expressed their need for more urban and stylized technical clothing." That includes ready-to-wear that can be worn before, during and after sporting activities. "Because Quebecers and Montrealers in particular are at the forefront of this phenomenon, the Plateau was the obvious choice for MEC to implement and test this new concept," said Tremblay.

The Montreal boutique will be staffed by a team of 15 who will oversee the 5,000 sq. ft. store designed by Montreal company Aedifica with a sleek and urban feel. Along with such popular collections as Patagonia, Prana and Castelli, the new lines of the MEC brand will be available. There are more than 1,400 products in the line that includes athletic fashion and a number of ready-to-wear collections that focus on cuts and colors. They were created by MEC's Vancouver-based design team.

The store will also offer high-tech shopping that allows customers to use in-house iPads to place orders with other stores in the Montreal area and have them delivered within the hour. As with all MEC stores, the rue Saint-Denis boutique features urban activities and in-store workshops for its customers.

I joined Mountain Equipment Co-op several years ago while shopping in downtown Victoria -- a lifetime membership is only $5. Similar to the Seattle-based REI (Recreational Equipment Incorporated), MEC was established in  1971 and today has nearly 3.8 members in Canada -- including 565,000 in Quebec. The company has 16 stores in six provinces and also an online store.
By Eat Play Sleep at September 26, 2012