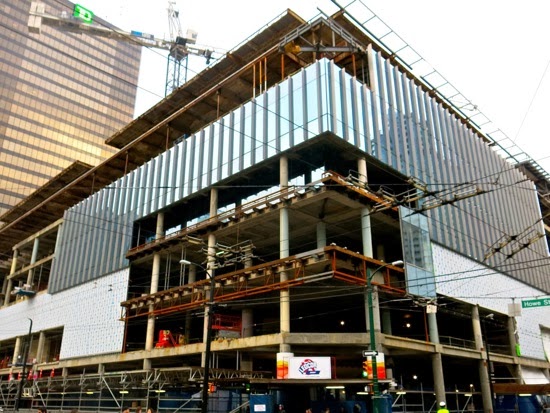 Nordstrom in Vancouver BC under construction on January 6, 2014. Photo by Sue Frause.

Canadian shoppers in British Columbia are keen on crossing the border and heading to Nordstrom in Washington state. But by the spring of 2015, they won't need to pack their passports to make a pilgrimage to the Seattle-based department store. That's when Nordstrom is scheduled to open in downtown Vancouver in the space vacated by Sears at Pacific Centre (formerly Eaton's). The Vancouver Nordstrom will be the largest of the Nordstrom stores in North America. It's located on Howe Street, across from the Vancouver Art Gallery, between Robson and Georgia. I passed by there today and took the above photo.

Nordstrom will also be opening in Calgary's Chinook Centre, Ottawa's Rideau Centre and in Toronto's Sherway Gardens. Both the Calgary and Ottawa locations are also home to Sears, while a new-construction store is planned for the Sherway Gardens store in Toronto. The Nordstrom quartet are the first full-line stores in Canada. Here are the tentative opening dates:

Nordstrom is partnering with Cadillac Fairview, one of North America's largest investors, owners and managers of commercial real estate, to lease the four stores at the shopping centres. Here's more information on the Vancouver project from Huffpost British Columbia (including artist's renderings).
By Eat Play Sleep at September 14, 2012

Hello there, I found your blog via Google at the same time as looking for a related topic, your website came up, it appears great. I've bookmarked it in my google bookmarks.

I'm actually trying to look into Google Map the exact location of the department store. I guess Google's database is yet to be updated.

I think if you look up Sears in Vancouver, BC ... it will still be there until October.

Downtown Calgary on a summer day. ©SueFrausePhoto Canada's WestJet Airlines begins service between Seattle and its main hub in Calgary,... 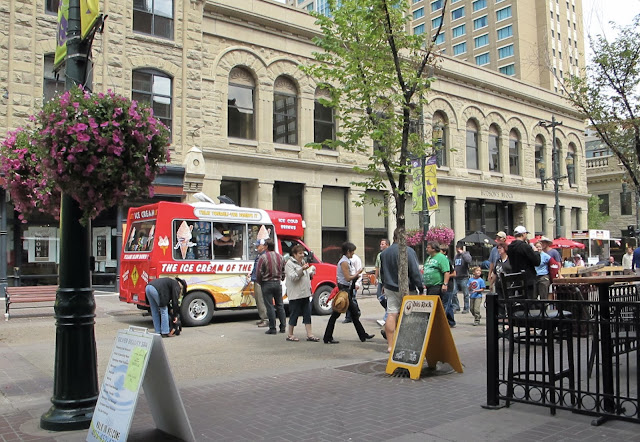