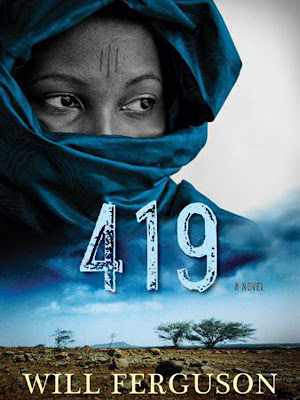 Will Ferguson was named the 2012 winner of the Scotiabank Giller Prize for his novel 419. The announcement was made at the conclusion of a Oct. 30 dinner and award ceremony at Toronto's new Ritz-Carlton aired on CBC Television. Hosted by Jian Ghomeshi, the black-tie event was attended by more than 500 members of the publishing, media and arts communities. It was also live-streamed on CBC Books.

Now in its 19th year, the Scotiabank Giller Prize is Canada's largest annual literary prize. It awards $50,000 to the author of the best Canadian novel or short story collection published in English and $5,000 to each of the four finalists. This year's shortlist of five authors and their books included:


A three-member jury selected the shortlist and ultimate winner. They included Irish author and screenwriter Roddy Doyle; Canadian publisher, writer and essayist Anna Porter; and American author and satirist Gary Shtevnoart. The trio read 142 works of fiction submitted by 51 publishing houses from across Canada. Here's what they had to say of the winning book:

"Will Ferguson's 419 points in the direction of something entirely new: the Global Novel. It is a novel emotionally and physically at home in the poverty of Lagos and in the day-to-day of North America. It tells us the ways in which we are now bound together and reminds us of the things that will always keep us apart. It brings us the news of the world far beyond the sad, hungry faces we see on CNN and CBC and far beyond the spreadsheets of our pension plans. Ferguson is a true travel writer, his eye attuned to the last horrible detail. He is also a master at dialogue and suspense. It is tempting to put 419 in some easy genre category, that would only servie to deny its accomplishment and its genius."

Travel writer and novelist Will Ferguson is the author of several award-winning memoirs, including Beyond Belfast, Hitching Rides with Buddha and the humor collection Canadian Pie. His novels include Happiness, Spanish Fly and 419. The three-time winner of the Leacock Medal, Ferguson was nominated for both an IMPAC Dublin Award and a Commonwealth Writers Prize. His work has been published in more than 20 languages around the world.

During the award ceremony, celebrity presenters included Measha Brueggergosman, Kim Cattrall, Alan Hawco, Rosannagh "Rosie" Maclennan and Rick Mercer. Ferguson, who hails from Calgary, appeared wearing a kilt for the event, and took a swig from a flash that he kept safe in his sporran.

The Giller Prize was established in 1994 by Toronto businessman Jack Rabinovitch in honor of his late wife, literary journalist Doris Giller. Scotiabank became the first ever co-sponsor of the prize in 2005, and it's been known as the Scotiabank Giller Prize ever since.