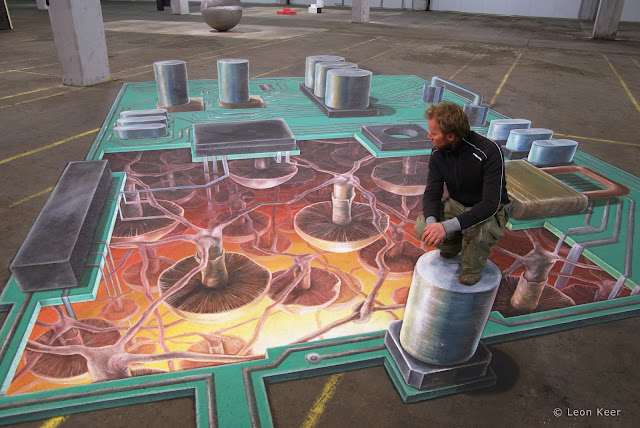 Leon Keer is a Dutch pop-surrealist artist from the Netherlands who is a world leading artist in anamorphic (3D) street art.

This year's chalk artists represent the region and the world, and include Amsterdam's Leon Keer. One of the world's leading 3D chalk artists, Kerr will present a 20' x 20' 3D chalk painting at Bay Centre. He started his painting September 11, three days prior to the festival weekend, so he'll be able to complete his work by the conclusion of the festival.

In addition to the chalk art, there will be a performance stage at Centennial Square featuring singers, dancers, drummers and local music acts. The Square will also host a kids' chalk zone.

Organizers are expecting more than 30,000 people to attend the festival, sponsored by the Victoria International Chalk Art Society. Executive Director John Vickers says his organization took deliver of approximately 10,000 pieces of chalk and they're looking forward to a weekend of sunshine!

Note to Festival Goers: Government Street will be closed to vehicle traffic from Fort to Yates Street, and will feature as many as 40 artists who will create 8' x 10' chalk paintings within the closure zone.