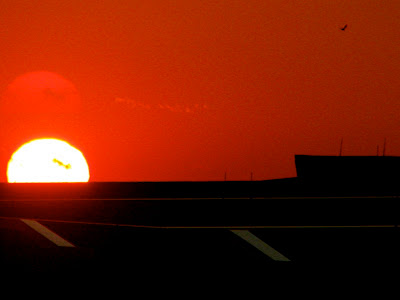 HALIFAX - This isn't my first Canadian train adventure. I'd taken the train from Vancouver to Montreal before. Granted, that was 3+ decades ago, long before blogs, digital cameras and my current life as a travel journalist.

On Tuesday, I flew to Halifax from Seattle via JFK on American Airlines, landing around 10 PM in the darkness and chilliness of Nova Scotia. I'd only been to Nova Scotia one other time, and was pretty smitten with this Atlantic province. I'm looking forward to getting to know her better.

Halifax Stanfield International Airport, actually located outside of Halifax in Enfield, was built in 2000. Many people remember the role the airport played following 9/11:

Going through Canada Customs and Immigration was a breeze, and the nice young man who asked me the usual questions ended his so-called inquisition with a smile and, "Welcome to Canada!" I had booked a room at the Quality Inn Halifax Airport Hotel, knowing I'd be arriving late and just wanting to crash. I called their free shuttle from a courtesy phone at the airport, piled in the van with the other weary travelers, and was soon in my clean, nothing fancy room.

Later this morning, I'll take a cab to downtown Halifax, where I'll spend two days and nights, giving me time to get reacquainted with the city. From there, it's a ten-day journey west to Vancouver, BC on Via Rail Canada. I'll be staying at Fairmonts along the way, with overnights in Montreal, Quebec City, Ottawa and Toronto (two nights). Then it's four days and four nights to Vancouver.

Welcome to Halifax! I hope you enjoy your stay in our fine city!

BTW Sue and readers–I’ve done the same train journey you’re taking, only took it the other way. I had to distill it into 1,000 words for a publication I was then editing. The result (and some pics) is here: http://www.randallshirley.com/blog/?p=237

Thanks AiA and Randall ... will be fun to compare notes upon my return!

You know I'll be following :)

I'm seeking help for the kids of Haiti.

I'm doing this for a non-profit group that gives their time to
creating oppurtunities for the kids in haiti. If anybody wants to give money then this is the site:

They provide children in Haiti a positive outlook through education.

Any help would be great

I figured it would be a good idea to introduce myself to everyone!

Can't wait to get to know you all better!


Just saying hello while I read through the posts


hopefully this is just what im looking for looks like i have a lot to read.

Looks like www.blogger.com justmight be a staggering forum for me
I am happy to have discovered it.


this is a laugh for you from me : Never tell a lie unless it is absolutely convenient. :

"Hello to all I can’t understand the best way to add your internet site in my rss reader. Enable me, please"

The moment I found this page was like wow. Thank you for putting your effort in making this post.