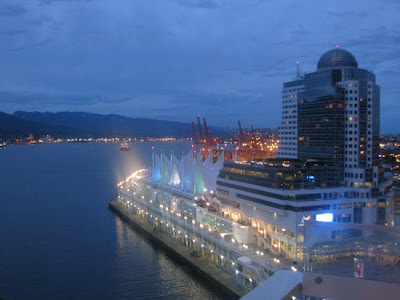 I have a close friend who worked at the Pan Pacific for a few years. In that time he did see Princess Diana and Charles, quite short. When he worked room service he had a few nice encounters. Billy Joel was actually tinkling away on a piano in one room where he took things up. Bringing up George Burns breakfast his hopes of seeing him were dashed when his assisant opened the door and called out to George in the other room "your breakfast is here" to which he heard only Georges reply.
One time, in the late 1980's I believe he was asked to bring up some glasses of orange juice to their best suite. He did. Came back with 20 dollar tip, alot now let alone then. He told his boss what nice bunch of guys they seemed when his boss asked. Turned out it was the Sultan of Brunei.
Yvonne de Carlo, a local Vancouverite, called the front desk one evening when he was working the desk and asked if she could possibly stay another night since she wasn't feeling well. He said she was so sweet. He has a lot of stories, but what he noticed was that the majority of the famous came across as nice people and not too demanding.

Thanks for sharing these stories ... there's something about hotel lore that I love. Maybe it's because I grew up with "Eloise at the Plaza"! It's also a bonus to hear about celebrities acting in a good way. Refreshing!