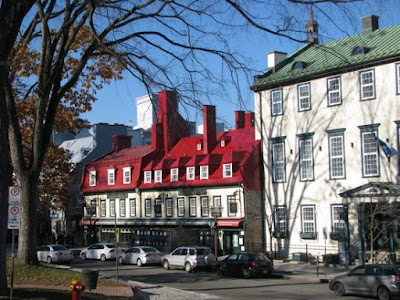 Quebec City is one of my favorites in Canada. Located on the Saint Lawrence River, it's been 403 years since it was founded by French explorer Samuel de Champlain in 1608. Originally called <Kebec> (an Amerindian word meaning place where the river becomes narrow), this French civilization quickly established roots in the Americas.
During the 17th and 18th centuries, Quebec City was the heart of New France, a French colony in North America (1534-1760) that covered what today is Eastern Canada, the Eastern US, the Great Lakes and Louisiana -- it extended from Hudson's Bay in the north all the way to Florida in the South.
Now in its 15th year, each summer Les Fetes de la Nouvelle-France or the New France Festival celebrates the arrival of the first Europeans on North American soil. The festival (August 3-7, 2011) is a showcase of theater, dance, street entertainment and parades -- five days of more than 1,000 events inside the walled city of Old Quebec. Click on for a fun video of the festival.
I'll be attending for the first time, and am looking forward to meeting the Quebec Giants (no, they're not a new baseball team!) and also dressing up in period costume for the New France Festival parade. My home for five nights will be the Fairmont Le Chateau Frontenac, where I stayed during my 2009 Great Big Canadian Train Adventure. The hotel, overlooking the St. Lawrence River, opened in 1893 -- five years after the Banff Springs Hotel in Alberta.
Colorful buildings of the fortified town of Quebec City, a UNESCO World Heritage Centre, taken in November 2009. Photo by Sue Frause.
By Eat Play Sleep at August 01, 2011

I love Quebec City. My mother's was born there and my grandfather on my fathers side was born there as well. Our family has been in Canada since 1647 with mostly French roots. Not to get too political but my grandmother was a staunch anti-separtist. She was a short petite thing and would stamp her little foot and say "I'm Canadian first, Quebecois second" much to some of her relatives that felt otherwise. I feel the same. Enjoy and have fun!!!