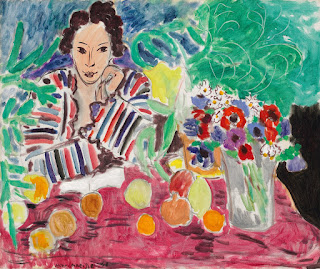 It should be a lively summer at the Vancouver Art Gallery with its new exhibition opening on May 26, 2012. Collecting Matisse and Modern Masters: The Cone Sisters of Baltimore includes nearly 50 paintings, drawings and sculpture from one of the world's great holdings of early European Modernism. The exhibition includes works by artists Henri Matisse, Pablo Picasso, Paul Gauguin, Vincent van Gogh, Pierre-August Renoir and other luminaries of modern art. The exhibition was organized by The Baltimore Museum of Art, The Jewish Museum in New York and the Vancouver Art Gallery. It runs through September 30, 2012.

The Baltimore Museum of Art has the largest collection of works by Matisse in the world, and this exclusive Canadian presentation includes a section of the artist's signature works from the Cone Collection. It's a rare overview that includes 27 works by Matisse. Noted works in the exhibition include Matisse's Large Reclining Nude and Striped Robe, Fruit and Anemones; Picasso's Blue period Woman with Bangs; and Gauguin's Tahitian masterpiece Vahine no te vi (Woman of the Mango).

Claribel and Etta Cone were early patrons of the avant-garde art of their time. They traveled frequently from America to Europe starting in the early 1900s, acquiring an impressive collection of paintings, drawings, sculpture and decorative art. They became important patrons of Matisse and Picaso, having met the two artists through Gertrude Stein and her family. Eventually, they acquired nearly 3,000 works of art, including more than 500 by Matisse alone. The sisters arranged to leave their entire collection to The Baltimore Museum of Art, along with personal papers and photographs documenting the formation of the collection. A selection of this archival material in included in the exhibition.

When the selection in the U.S.?

I'm not sure if it's coming to the US. I did go to see the exhibition last month, here is my post about it: