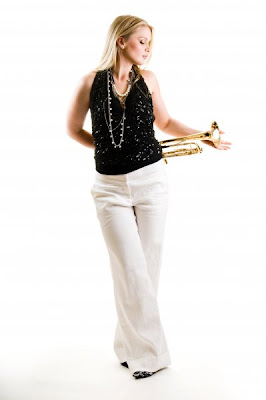 I have to say I'm disappointed I'll miss Bria Skonberg's gig at Djangofest Northwest in my hometown of Langley, Washington.

DjangoFest NW, celebrating its tenth year, runs Sept. 22-26, 2010 and is the premier showcase of Gypsy Jazz in North America. Also know as Gypsy Swing, Gypsy Jazz is an idiom that was reportedly started by the Ferre brothers in the late 1920s; it grew in popularity due to guitarist Django Reinhardt in the 1930s. Because of its mainly French origins, it's often referred to by the French name, jazz manouce, or manouche jazz.

Bria Skonberg grew up in Chilliwack, BC. Now 26, the jazz trumpeter and vocalist has been performing since she was four. Originally she started out on the piano, but at age 11 she switched to trumpet. She completed a degree in Jazz Performance from Capilano University in Vancouver, where today she's the leader and manager of Bria's Hot Five and The Big Bang Jazz Band. She also performs as a soloist and vocalist with Dal Richards and his Orchestra and co-founded the all-female seven-member jazz group Mighty Aphrodite.

In 2009, Skonberg released her first solo album, Fresh. It features original songs and arrangements of jazz and mainstream standards.

Skonberg performs at DjangoFest NW on Friday, Sept. 24 at 3 PM with Howard Alden and Bucky Pizzarelli at Whidbey Island Center for the Arts in Langley. Also on the afternoon bill is the Doug Martin Avatar Ensemble featuring Annie Staninec.