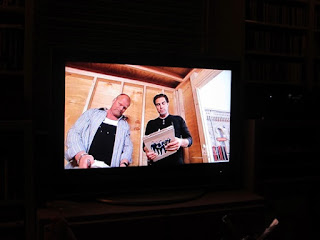 Both my husband and I are hooked on HGTV's All American Handyman. Probably because (1) my hubby is a handyman and (2) my dad was a handyman. We just started watching this season, and caught last night's final episode. I was a bit disappointed that Allison didn't win -- Jared ended up taking home the $10,000 grand prize, along with some sort of TV deal.

I wasn't surprised that the two All American Handyman judges, Mike Holmes and Scott McGillivray,  are Canadian -- I heard it in their Canada speak while watching the show for the first time. Mike Holmes is well known to TV audiences. The 48-year-old from Halton Hills, Ontario is the host of Canadian TV shows Holmes on Homes and Holmes Inspection, and a judge on HGTV Canada's Handyman Superstar Challenge. A contractor by trade, in 2006 he launched The Holmes Foundation to support the training of youth in skilled trades through apprenticeships and scholarships. Holmes is also the author of two books, writes a weekly newspaper column and is heading up Wind Walk -- a sustainable development in southern Alberta.

Scott McGillivray describes himself on his website as a "full time real estate investor, television host, executive producer, writer and educator." And he's also got really white teeth! The 33-year old was born in Toronto, and in addition to being a judge on All American Handyman, he's the host of HGTV's Income Property. McGillivray is a graduate of the University of Guelph, with an honor's degree in commerce. McGillivray and his business partner Michael Sarracini have developed the Lifetime Wealth Academy, a real estate coaching company specializing in real estate training and mentorship.

I'm a skilled do-it-yourselfer so I feel qualified to make these comments. Come to my house and look at some of the things I've done and you will agree. The All American Handyman show is a joke for a number of reasons. Where do they get the contestants? Installing a toilet is a pretty simple task yet the so called best of the best screwed up.

But the biggest problem I have is the concept of sending someone home after each challenge. Maybe the very best overall guy wasn't that good at building a dog house. This should be like the decathalon. For each project, the best gets 100 points and the worst gets -0-. Everyone else gets a score in between based on the quality of their work. Other than first and last the scores don't need to ne announced to prevent someone from takeing a commanding lead and ruining the eventual outcome. In the end, the winner is the competitor with the most points.

I also disagree with the timed aspect of the competition. A good job requires time and forcing people to rush diminishes the quality. I say that once the first competitor finishes a clock starts allowing 20% of the time taken by the firts to be done. When that clock runs out the event has ended and let the grading begin.

I don't expect this to be read but I would LOVE to speak with Mr. Holmes about how to improve this program, from the eys of someone who knows a little about being handy. (954) 753-3748 pcb47@bellsouth.net

Thing is, your ideas might be good at finding the true best handyman amongst the contestants, but would make for not so fun reality TV. People seem to like eliminations, timed challenges, etc. that you find in almost ALL reality TV. As far as the talent they find? You do know that they are looking for "personalities", not necessarily the actual best craftsmen/craftswomen. I could have put in a toilet better than half of them, but I'm also rather dull and would probably get too nervous in front of a camera. If you feel you could do great, then apply for next season!

I'm going to enter my hubby. He's really a great handyman but also would be a good 'personality' as he's 66, handsome/silver haired and in his real life owns a pr/advertising agency. He'd be perfect! It's definitely all about entertainment ...