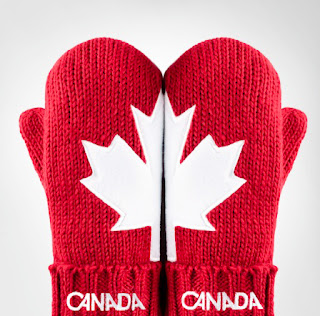 If you never got a pair of the 2010 Canada Red Mittens, you can now get a pair emblazoned with 2012. For the third year in a row, the Red Mittens are back. This time, they're looking toward the future, with the London 2012 Olympic Games scheduled for next summer and the Sochi 2014 Olympic Games following two years later in Russia.

The iconic mittens became a symbol of national pride for Canadians during the 2010 Winter Games in Vancouver, and showed the country's support for their Olympians.

The Canadian Olympic Foundation launched the 2012 design this fall. Three dollars from the sale of each pair of $10 Red Mittens goes to support the athletes through the foundation, providing athlete development programs, coaching and equipment. The mittens are available in store at The Bay, Zellers and Home Outfitters. They're also available online at The Bay.

Once you have your mittens, share a photo of yourself wearing them, and post it on the Canadian Olympic Team's Facebook page. Everybody wins!
By Eat Play Sleep at October 11, 2011

Hooray! Mine got so much use last year I'm in dire need of a new pair. Winter just isn't the same without some bright red Canada mittens.