50% off VIA Rail fares in Economy, Business and Sleeper classes 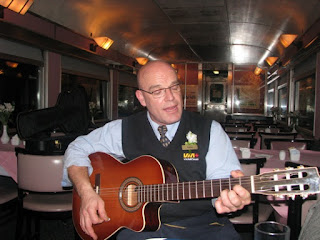 Go anywhere on the VIA Rail network during that time frame and receive 50% off the adult regular fare in both Economy and Sleeper classes and day of the week. If booking in Business class, it's good for travel on Saturdays and Sundays only. Here are some sample one-way fares:

Entertainment on board The Canadian in November 2009. Photo by Sue Frause.
By Eat Play Sleep at October 13, 2011