Searching for coffee in Edmonton, Alberta (it's not Starbucks) 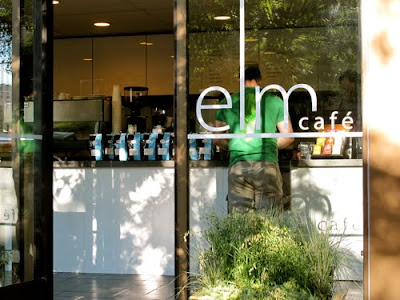 One of my goals when traveling is to seek out the good, local spots that are independently owned. So when it comes to coffee, I shun Starbucks in favor of something a bit less corporate.

I met Nate Box a few days ago while on a nine-day culinary adventure in Alberta with Canadian chef Ned Bell. He joined us for dinner one evening at Skinny Legs and Cowgirls, and that's when I found out he's the owner of Elm Cafe.

Located in the Oliver neighborhood, which Nate says is a blend of people from students to seniors, his small coffee shop features 49th Parallel Coffee. It's the only spot in Edmonton that does. If you're not familiar with 49th Parallel, it's a Vancouver-based coffee roaster started by Michael and Vince Piccolo (those coffee geniuses who gave Vancouverites Caffe Artigiano, which they have since sold).

Nate, who has run a couple of kitchens before, set up his coffee business in a former coffee/pastry shop. The 27-year-old gutted everything except the floor, and the 225 sq.ft. space features a small window bar. Most of the folks that came in while I was there got their orders to go.

In addition to the coffee, Nate has muffins from the new Duchess Bake Shop. There are two choices a day, with such temptations as Cherry Almond or Banana Chocolate Pecan. I'm more of a savory person in the morning, so enjoyed a breakfast sammie made on site.

Community-wise, Nate is involved with Edmonton's Next Generation. When he's not making the perfect espresso, latte or cappuccino. 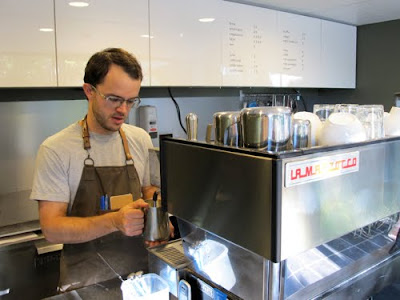