2010 Winter Olympics' Red Mittens are back with a new look 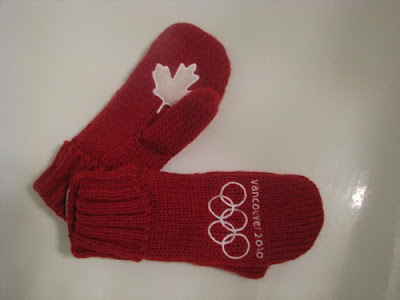 I was so excited to have my very own pair of Red Mittens from the Vancouver 2010 Olympic Winter Games. They were one of the hottest items of the Olympics.

Now the Canadian Olympic Foundation has launched a new design of the iconic Red Mittens. They're the same price ($10) and design, just a new look. Plus, you can register them online at Hudson's Bay Company, and enter a contest to win a trip for two to watch the 2012 Canadian Olympic Team at the Summer Olympics in London. (Sorry, only Canadian residents may enter the contest).

The mittens are available at The Bay, Zellers and Home Outfitters stores as well as online at the link above beginning in late October 2010.

One athlete who is sure to have a pair or two is Adam Kreek, 2008 Gold Medalist (Rowing), and Proud Red Mitten Ambassador.

My Olympic Red Mittens pictured in Vancouver, BC during the 2010 Winter Games
Photo by Sue Frause
By SUE FRAUSE at September 28, 2010