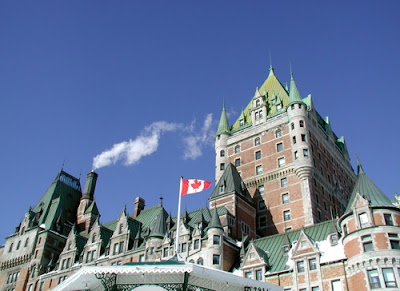 If you're a Johnny Reid fan, the popular Scottish-born country music singer will be performing in Quebec City this month. Living in Canada since 1988, Reid attended Bishop's University in Sherwood, Quebec.

In 2008, he was nominated for a Juno Award and was named Male Artist of the Year (2008 and 2009) by the Canadian Country Music Association.

The singer, whose new album A Place Called Love was released on EMI in Canada this year (2011 for the US), is in concert on Friday, Nov. 26 at the Fairmont Le Chateau Frontenac Ballroom.

The hotel high above the St. Lawrence River is offering a Johnny Reid Package for the concert:

If you live in Toronto, Fairmont and Porter Airlines are offering a Johnny Reid VIP Package of music and romance from Friday, November 26 to Sunday, November 28. It includes:

* Access to a live performance by Johnny Reid in the Fairmont Le Château Frontenac Ballroom on Friday, Nov. 26 at 8 PM. There will also be an opportunity to meet the singer.
* Round-trip flight from Billy Bishop Toronto City Airport to Québec City with Porter Airlines
* Two nights’ accommodation at the Fairmont Le Château Frontenac
* Breakfast for two each morning of your stay
* A CD prize pack