Dancing With The Stars' Chris Jericho hails from Winnipeg 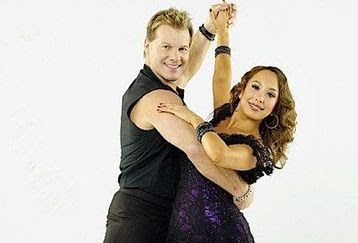 As a fan of Dancing With the Stars, I was surprised to hear that Chris Jericho was raised in Canada. And by "hear," it's because last night when he dedicated the foxtrot to his mother who died from cancer, I "heard" the word mum on several occasions. That's so Canadian.

Chris is best known for being a champion with WWE. For those like me not that all familiar with the wrestling world, that stands for World Wrestling Entertainment. And according to his website, Chris is also "a talented actor, television personality, radio host, and rock star." He's lead singer of the rock band Fozzy and author of A Lion's Tale: Around the World in Spandex.

Chris was born Manhasset, New York on Nov. 9, 1970 as Christopher Keith "Chris" Irvine, but was raised in Winnipeg.
Chris Jericho and partner Cheryl Burke on Dancing With The Stars
By SUE FRAUSE at April 05, 2011