Explore and research the whales of the St. Lawrence River 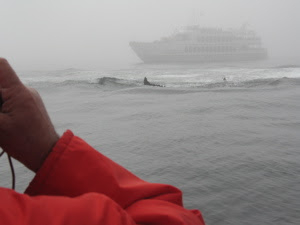 The Ocean Research and Education Society (ORES) is a Swiss-Canadian whale research organization that works primarily in eastern Canadian waters. Since 1992, they have been conducting whale research and offering opportunities to meet the whales up close.
The whales of the St. Lawrence, which feed from mid-June to mid-October in the river's estuary, include blue, fin back, Minke, humpack, beluga and sperm whales. There are also harbour porpoise, white beaked and white-sided dolphins, seals and shorebirds.
Tours of Exploration is offering a program through ORES titled Quebec: Whales of the St. Lawrence. Choose from either the five-day exploration program or the 13-day educational whale research project. The programs are headquartered at the research station in Bergerrones, Quebec, located along the shores of the St. Lawrence River. The study area is within the boundaries of the Saguenay - St. Lawrence Marine Park.
5-Day Exploration Program
Departures: Daily, July 1 - September 15, 2011 (minimum two people)
Cost: $845 CAD + 5% tax
Departure City: Bergerrones, Quebec (3.5 hours from Quebec City)
13-Day Whale Research Project Program
Dates: July 3-15, July 17-29, July 31-August 12, August 14-26, August 28-September 9
Cost: $1,885 CAD (plus $90/week for food)
Departure City: Bergerrones, Quebec (3.5 hours from Quebec City)
Tours of Exploration is a licensed tour operator and travel agency that offers soft adventure, birdwatching, wildlife viewing, natural history, culture and ecotourism programs in Canada, Central and South America, Asia and the South Pacific. They are headquartered in Gibsons, on British Columbia's Sunshine Coast.

Whale watching on the St. Lawrence River
Photo by Sue Frause
By SUE FRAUSE at April 03, 2011

Thanks for some quality points there. I am kind of new to online , so I printed this off to put in my file, any better way to go about keeping track of it then printing?

You can always bookmark the page and save it that way. Glad you enjoyed it! I love Quebec ...