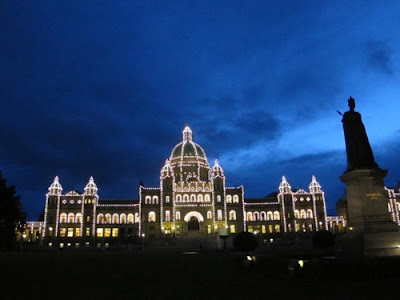 Queen Victoria reigns eternally from the front lawn of the BC Parliament Buildings in Victoria on Vancouver Island. Photo by Sue Frause.
By SUE FRAUSE at May 21, 2011

Also known as the "MAY two four weekend" here, (reference to the 24--colloquial name for a case of beer.) Not too many monarchists left in Canada or even in Victoria BC. Things have slipped as we have grown as a country.

Didn't know that the "two four" referred to 24 beers in a case. That's great! Yes, it's just another three-day holiday I'm sure, like many of our historical holidays. Thanks for the info!