Winnipeg celebrates the return of the National Hockey League 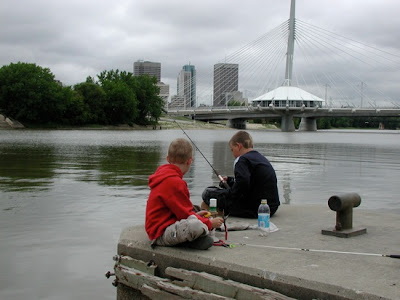 While Vancouver and British Columbia are still celebrating the Canucks' win over the Boston Bruins in Game #1 of the Stanley Cup Final, three provinces to the east in Manitoba there's a whole lot of happy hockey fans, too.

True North Sports & Entertainment Limited has entered into an agreement with Atlanta Spirit, LLC to purchase the Atlanta Thrashers Hockey Club of the National Hockey League. The purchase will be subject to the NHL Board of Governors approval at a board meeting on June 21, 2011.

That aproval is based on a number of things, including the level of support shown by the Winnipeg community during a season ticket campaign. True North kicked off its Drive to 13,000 campaign earlier this week, which includes presales as well as general public onsales. The presale, June 1-3 (ending at 10 PM), provides existing Manitoba Moose season ticket holders, mini pack holders and corporate advertising the oppotunity to purchase seats during the advance window presale. The public onsale to the general public begins June 4 at 12 o'clock noon.

Once the NHL Board of Governors approval is granted, the purchase of the Thrashers by True North will be complete, clearing the way for the NHL club to relocate to Winnipeg’s MTS Centre for the 2011-2012 hockey season. Currently, Winnipeg is home to the Manitoba Moose of the American Hockey League.

Manitoba was home to the Winnipeg Jets, a NHL hockey team, from 1979-1996. Due to money issues, the franchise moved to Phoenix where they played as the Phoenix Coyotes. As far as what this new NHL franchise will be called, it's anybody's guess.

These young fisherman in Winnipeg will be able to cheer on their home team when the NHL returns to their hometown for the 2011-2012 hockey season. Photo by Sue Frause.