'My Winnipeg' art exhibit at Parisian gallery through 9/25/11 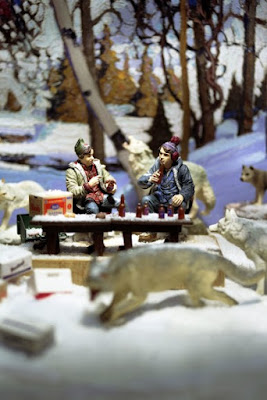 Winnipeg is known across Canada for its vibrant art scene. Now the French are being exposed to the artists of Manitoba. Parisian art collector Antoine de Galbert is presenting a survey of Winnipeg's current art scene at his gallery La maison rouge. The exhibition, simply called My Winnipeg, opened June 23, 2011 and showcases Winnipeg as a leader in contemporary art.
Featured among the 71 artists and proponents of what's known as prairie surrealism are Guy Maddin, Ken Monkman, Marcel Dzama and other other members of the now defunct Royal Art Lodge collective. The varied genres include paintings, video, collages, installations, hybrid characters, sculptures and a revamped image bank of archetypal Winnipeg pop culture.
The exhibit opens with filmmaker Noam Gonick's snapshots of Winnipeg that he took while researching locales for his film Stryker. The edgy, urban photos reinforce filmmaker Guy Maddin's description of Winnipeg as a "rich and strange place." Maddin's films were featured in Paris in a 2010 retrospective of his work. It included his genre-bending, docu-fantasia My Winnipeg, which the art exhibit was named after.
Co-producer of the exhibit is Plug In Institute of Contemporary Art in Winnipeg, along with MIAM, Gallery One One One at the School of Art, University of Manitoba and the National Arts Centre. My Winnipeg will be in Paris until Sept. 25, 2011 before moving on to a museum in Sete, France in November. It will return to Winnipeg in 2012 at Plug In, just in time for the gallery's 40th anniversary.
The full-color, 248 page bilingual catalogue for My Winnipeg features more than 200 works of art by the 71 artists. Also included is writings by Sigrid Dahle, Robert Enright, Noam Gonick, Anthony Kiendl, Cathy Mattes and Meeka Walsh. It's also designed like a travel guide, and includes such Winnipeg information as maps, listings and recommendations of places to go by the artists and curators of the show. If you can't make it to Paris or Winnipeg to see the show, it's available at Plug In.
"Early Snow with Doug and Bob" by Winnipeg artist Thorneycroft, from her series titled "Canadiana Martyrdom." Photo courtesy of Travel Manitoba
By Eat Play Sleep at July 11, 2011