Admittedly, I'd never heard of Montmorency Falls in Quebec until I saw them during a visit to La Belle Province a number of years ago. At the time, there wasn't all that much water flowing from Montmorency Falls over the cliff to the St. Lawrence River below. But during a recent visit in August 2011, they were quite impressive -- as can be seen in my photo above.

I was also impressed to discover that Montmorency Falls, 83 meters tall (272 ft.), are 30 meters (98.5 ft.) higher than Niagara Falls. I finally paid a visit to those iconic falls for the first time during my Big Canadian Train Adventure from Halifax to Vancouver in 2009, so it was fun to compare the two.

It was a hot afternoon when we arrived at Montmorency Falls from nearby Ile d'Orleans, just a quick bridge ride across the Saint Lawrence River. The falls are located in Montmorency Falls Park (Parc de la Chute-Montmorency), a Quebec provincial park about seven miles from downtown Quebec City. An aerial tram/gondola holding 40 passengers links you to the lower and upper portions of the park. At the top, you'll arrive at Manoir Montmorency. Make sure to walk across the suspension bridge that traverses the crest of the falls, linking both sides of the park and with spectacular views below and beyond.

Hiking trails cross-cross the park, and if you're feeling extra outdoorsy, take the staircase from the bottom to the top of the park. All 487 steps! There are plenty of dining options if you work up an appetite. Another thing I discovered during this visit was that the Ice Hotel (Hotel de Glace) was located its first year in 2001 at Montmorency Falls. It relocated from the falls to an area a bit outside of Quebec City, but in 2011 was moved to a new site that's just ten minutes from the capital city. Next year's edition will reopen on Jan. 12, 2012.

I missed the Loto-Quebec International Fireworks Competition while I was in Quebec this year, held at Montmorency Falls July 23-August 12, 2011. Five countries (Spain, Russia, Portugal, Mexico, Italy) participated in the 17th annual event. If you visit in winter, there's snow walking, snowshoeing and ice climbing. 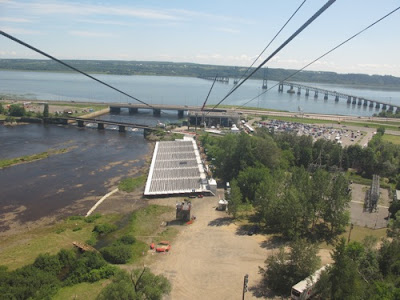 Up, up and away on the cable car / gondola. 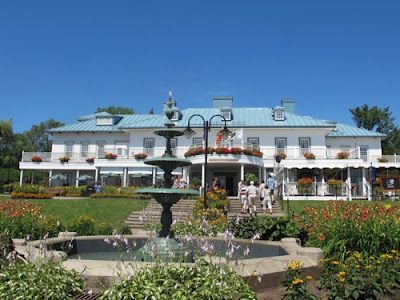 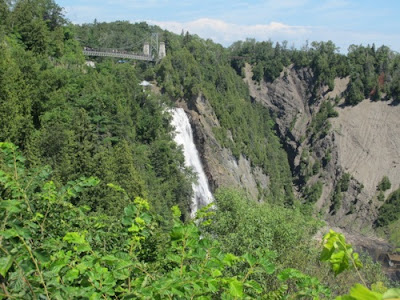 The waterfall as seen from a lookout point. 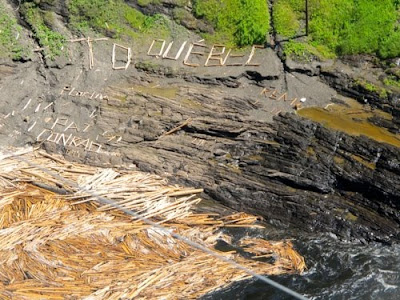 Somebody wrote a postcard "To Quebec!" 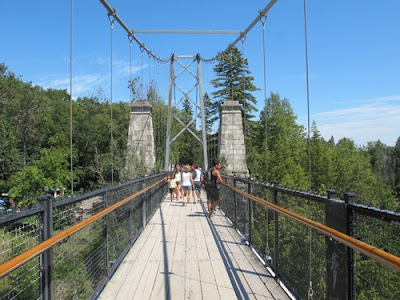 A suspension bridge crosses atop the falls. 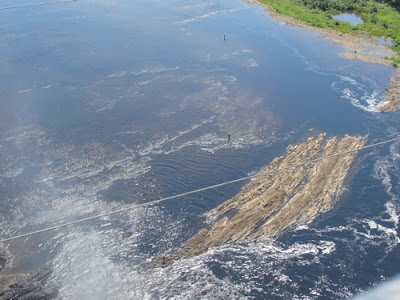 I swear that's somebody standing in the river!