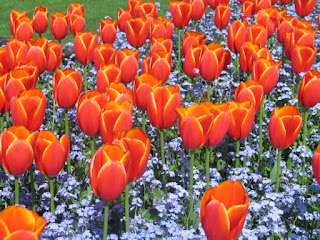 I'm off to Holland next week, where I'll be attending Floriade 2012. It's the World Horticultural Expo, held every ten years in Venlo in the Northern Limburg region of Eastern Netherlands. I'll also be going to the Keukenhof flower gardens, the site of more than seven million flowers. The gardens are open for two months, March 22-May 20, and the blooms seem to be right on schedule. Plus I'll be spending time in Amsterdam and Rotterdam, where I last visited 30+ years ago. Cheese, chocolate, spring in bloom!

That brings me to Canada, which across most parts of the country is experiencing a very warm first full day of spring. An article in The Gazette headlined it this way: 'March-Mildness' in Canada upstaging the winter that wasn't: Environment Canada.

So does that mean that the Canadian Tulip Festival, scheduled for May 4-21 in Ottawa, may be out of blooms? A check of its website gives no programming or information about this year's festival, which is celebrating its 60th anniversary. I found that a bit odd, since it's only six weeks away, so I wasn't surprised to read that the hotels in Ottawa are getting a bit nervous about the lack of advertising for the world's largest tulip festival. As one commenter on the CBC article stated: "The festival is obviously on its last legs."

The history of tulips and Canada goes back decades. Here's an excerpt on the Canadian Tulip Festival's history link about the connection: "In the fall of 1945, Princess Juliana of the Netherlands presented Ottawa with 100,000 tulip bulbs. The gift was given in appreciation of the safe haven that members of Holland's exiled royal family received during the World War II in Ottawa and in recognition of the role which Canadian troops played in the liberation of the Netherlands."

Canadian Tulip Festival Update: According to canada.com, "It's full bloom ahead for Ottawa's tulip festival." The Canadian Tulip Festival received word of a $350,000 Celebrate Ontario grant on March 21. The festival website still has yet to been updated, but word is that a full schedule will be online March 26.

Tulips in bloom near English Bay in Vancouver | April 28, 2007 | Photo by Sue Frause For more of my spring flower photos, see the slideshow here.
By Eat Play Sleep at March 20, 2012

You will find Amsterdam much as you left it. The major changes are of course outside of the centre where some taller buildings have been built.
If you have time and the weather is nice you should catch the metro to Gaasperplas, last stop. It's a very nice and quiet park around a resevoir. A great escape, even better if you take your bicycle on the metro and ride from Gaasperplas to Abcoude...about 30 minutes, have lunch and then back. You ride past fields and even a windmill or two. It's only about 5k each way and an well signed and easy ride.

Thanks for the travel tip. The weather looks like it will be fairly nice, in the 50s with sunshine, but of course I'll plan on some rain, too!