Canadians make a run for the border to the Bellingham Costco, locals want own hours 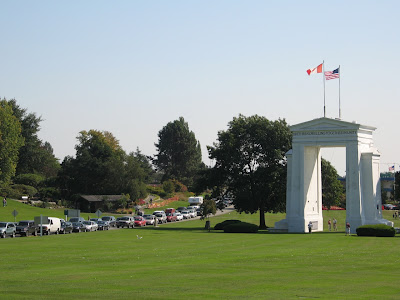 The iconic Peace Arch monument at the border crossing between Canada and the US has two messages emblazoned on it: Children of a Common Mother on the US side as you enter Canada and Brethren Dwelling Together In Unity welcoming people entering Canada to the USA. The latter inscription is particularly ironic, what with the big brouhaha over Canadians storming the Bellingham Costco just south of the border in Washington state. Why Costco? They've got milk. Cheap milk.

A report on KING-5 in Seattle makes a reference to the shoppers as "milk piranhas" and there's even a Facebook page with more than 4,000 'likes': Bellingham Costco needs a special time just for Americans. The description on the Facebook page is simply, "People lets rant about how horrible Bellingham Costco is to its Founding customers"(sic).

Although a lot of locals aren't happy about the Canadian invasion, wanting special hours set aside for American shoppers, others aren't so bent out of shape: Take a chill pill, says Coscto shopper over cross-border kerfuffle is an article from The Province in Vancouver, BC. And the story has reached the big media, with Fox News reporting Border war: Costco customers in Washington blame Canada for shopping hell. It's put Bellingham and Whatcom County in the spotlight, as reported in The Bellingham Herald.


UPDATE: This ongoing story made the front page of The Seattle Times on August 18, 2012: Canadians crowd Costco, stores near border -- but not everyone minds

It's easy to see both sides. There is no excuse for Canadians leaving garbage in parking lots or being rude. No excuse. However I can see why some families with children who use a lot of milk and live close enough to the border may be tempted to shop across the border. However the cheaper milk in the U.S. contains a bovine growth hormone which is illegal in Canada and Europe. Here's a link on the history of it in Canada.

Personally I wouldn't feed it to my kids. Certainly milk without the hormone is available in the U.S. but at a higher cost which negates the reason to shop across the border.
Border towns on the U.S. side are doing better than other towns in the U.S. because of the Canadian shoppers, so some may be shooting themselves in the foot. I doubt Costco cares who's buying as long as someone is.
Many in Canada feel that regular cross-border shoppers aren't doing Canada any favours by taking their money out of the country. There is a feeling in Canada that these regular shoppers don't understand how their regular trips south effect their own local econony. They also seem to rant on about the high cost ( some exaggerated ) of goods in Canada. It's not fair to compare a store in a small centre like Bellingham to a big centre like Vancouver. Just as it's not fair to compare the U.S. system of the federal gov't buying all unsold milk that a dairy farmer produces ( hence the bovine growth hormone ) to that of Canada where a farmer only gets what they sell.