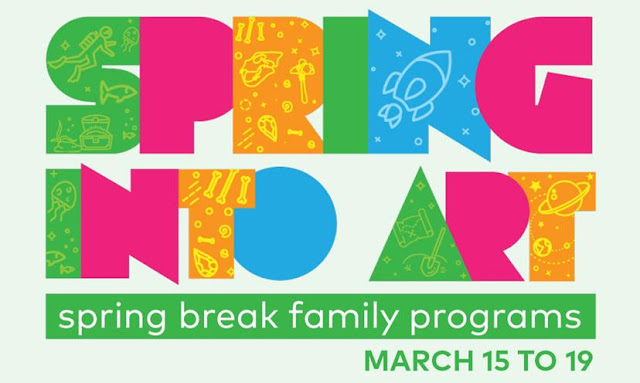 US citizens may not be able to visit Canada during COVID-19 due to the US-Canada border closure, but families on both sides of the border can tap into the Vancouver Art Gallery's Spring Into Art,  offered online from March 15-19, 2021. The daily online art making sessions are free, and workshops are led by Family Programs Coordinator Christina Jones and/or a local artist, who will share their artworks and demonstrate activities. Open to all ages and abilities.

Learn about Amabie, a Japanese yokai first documented in the Higo prefecture (now known as Kumamoto). Create your own Amabie postcard to send to a friend or family member with a lucky message of care and good health. This yokai is the subject of visual artist Cindy Mochizuki's animated film Amabie, on view in the exhibition Stories that animate us. In the story, a mermaid-like creature appeared as a glowing green light with three fish-like legs, scales and a beak. She was said to have passed the message to those who spotted her: "Good harvests will continue for six years, but, if disease spreads, show a picture of me to those who fall ill, and they will be cured." This story was largely forgotten until the 2020 pandemic, when people took to social media creating their own illustrated versions of Amabie as part of the #amabiechallenge.

Find out more about the materials, stories and ideas that inspire interdisciplinary artist Sonny Assu as he gives a private tour of his art studio. The tour includes behind-the-scenes access into Assu's artistic practice and how his creations come to life. Assu's work is on view in the exhibition Uncommon Language.

A special screening of Allison Hrabluik's film The Splits will be shown. Hrabluik contacted people for the film who she thought moved in interesting ways -- starting with gymnasts, a hula hooper and weightlifters who moved in athletic ways. she also incorporated other ways of performing like opera, burlesque, amateur music and how people move at work and with animals. "I also incorporated elements of our lives that lean toward the grotesque -- the salmi makers and the hotdog eater," explained Hrabluik. "I was interested in the similarities between the different actions performed." Taking inspiration from The Splits, participants will experiment with surprising combinations of actions and sounds effects.

Award-winning writer, printmaker and illustraor Cole Pauls uses comic arts as a way to celebrate his Tahitan culture. Inspired by settings in outer space, participants will work with Pauls to create a zine that tells your story.

Sandeep Johal uses shapes and lines inspired by her South Asian heritage to tell stories. Participants will tell their stories by transforming shapes, patterns and colored paper in creating their own imagined animal collage.