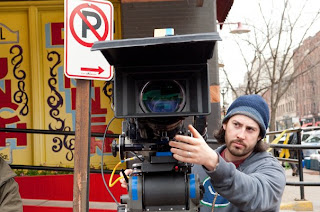 Loved Thank You For Smoking, Juno and now Up in the Air. Based on Walter Kirn's novel, it's the story of Ryan Bingham, a corporate downsizer who spends most of his time ... up in the air.

I went to opening day in Seattle and was enchanted with George Clooney's heartfelt performance, along with the strong supporting cast and the director who made it all so wonderful: Jason Reitman.

What I didn't know is that Reitman is Canadian, born in Montreal on Oct. 17, 1977. He's also the son of comedy director Ivan Reitman (Ghostbusters and Kindergarten Cop to name two) and actress Genevieve Robert (also known as Genevieve Deloir). Oh, and he has 18,000+ followers on Twitter, and I'm one of them.

Up in the Air is getting thumbs up reviews, including this one from Martin Morrow of CBC News. And here's an interview with Reitman on The A.V. Club.