Steveston, BC: 34 million sockeye return to the Fraser River 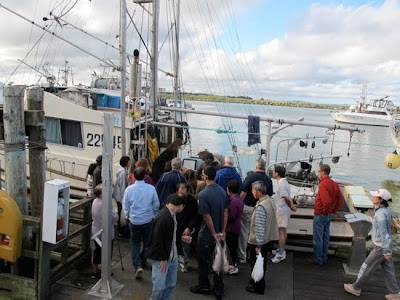 Although the Steveston Salmon Festival was already held on July 1, 2010, there's plenty of reason to keep on celebrating the salmon this summer.

The best run of sockeye salmon on the Fraser River in nearly a century has put this BC community on the map. The latest number is 34 million; that's compared to 1.7 million in 2009.

I was in Steveston on a recent Saturday, and the docks were jammed with customers lining up for fresh fish from local waters. They were selling for about $25 per fish; I opted not to buy one, as I didn't have a cooler in my car. It was a good decision, as I ended up in a 90-minute line at the Canada-USA border, and a warm fish in the back seat isn't my idea of a fun traveling companion.

Plus, I'd caught an 18.5 pound chinook (king) salmon at Sonora Resort in July, and was looking forward to barbecuing it for a garden party/dinner at our house over Labor Day weekend.

As The Globe and Mail reports, Sockeye is back on the menu. 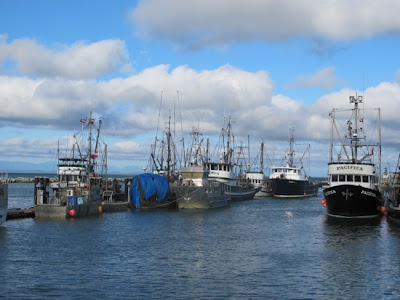 Customers line up for sockeye salmon in Steveston, BC on August 28, 2010
Photos by Sue Frause
By SUE FRAUSE at September 03, 2010